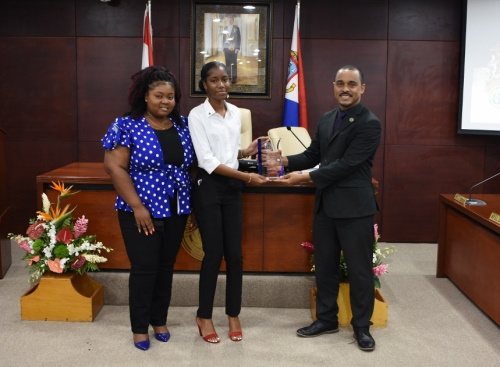 Ms. Carty was nominated for being an outstanding citizen with a passion to work for and give back to her community.
Her nomination was submitted by Ms. Stephania Decembre who described Ms. Carty as a kindhearted person that loves to help others and in giving back to her community.
An active member of the Sint Maarten South Omega Leos club since November 2019, Ms. Carty currently holds the position of Club Secretary for the Leonistic year 2020-2021 and also serves as the current Leo District Secretary of District 60B.
These positions have helped her to open up and excel in her skills.
Ms. Carty is known to take great advantage of meaningful opportunities that arise which allows her to grow as a professional and continue to serve her country.

In her acceptance speech, Ms. Carty expressed words of gratitude for being presented with the 2021 President of Parliament Award.

In her closing remarks, she encouraged everyone to “try and help someone in any way you can, no matter how small or big your contribution is, you’re aiding in the improvement of someone’s life”.