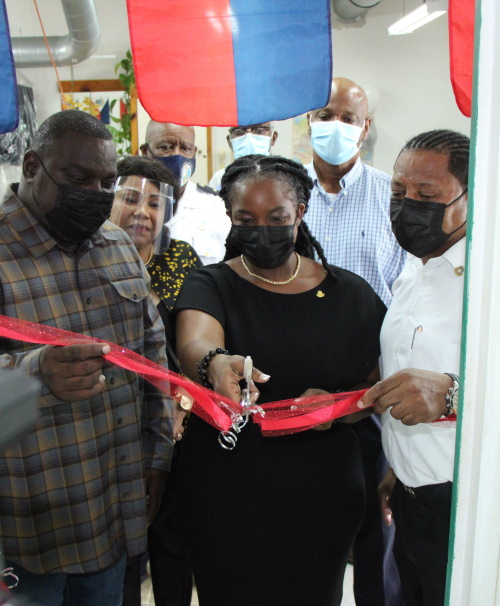 PHILIPSBURG:--- Tuesday, September 14, was the official (re)opening ceremony of the sewing center at the Point Blanch prison.

The sewing center at the Pointe Blanche prison has been closed for some years, but after minor renovations, it has officially opened back its doors for the inmates residing at the Pointe Blanche prison. Present during the ceremony were the honorable Minister of Justice, Ms. Anna E. Richardson and her supporting staff, the interim director of the prison, Mr. Aartwichgt Bell, the prison management team, the sewing instructor Mr. Carlos Gomez and the prison staff members.

In the month of April 2021, a survey was conducted amongst the inmates to identify their interests in daytime and rehabilitation programs that could be offered by the prison to ensure that the investment that the ministry makes is a positive and necessary one. The results yielded that about 65 inmates, which includes male and female inmates, have expressed interest in the proposed programs, which translates to approximately 85% of the population. Based on the survey, thirty-seven (37) male and three (3) female inmates expressed interest in participating in the sewing center.

The sewing center has always been used to teach the inmates how to sew where they learn a trade that can be used after release. Minister Richardson, therefore, has been adamant in getting the sewing center reopened as soon as possible to allow the inmates to be proactive during their stay and engage in activities that can positively affect their reintegration into society. Now reopened, the inmates will make uniforms for the inmates, prison officers, and other prison staff. The aim is to eventually have all uniforms used in the justice sector such as KPSM, douane, and so on, to be made by the inmates. This not only provides the inmates with meaningful daytime activity, but it also can reduce the overall uniform expenses within the Ministry of Justice.

The (re)opening ceremony commenced with encouraging words by Minister Richardson who stated:
“Today is monumental. After taking such a hit from the hurricane and some other drawbacks, we are here today. It is such a warm feeling to be here right now. I am excited and I welcome Mr. Gomez back to the sewing center. I cannot wait to be able to show the public all that these young men can do under the leadership and guidance of Mr. Gomez. Congratulations to the management team. What you are doing and bringing to fruition is a great deal and it must not go unmentioned. I commend you for your dedication in reestablishing the sewing center and giving our clients the opportunity to be involved and proactive during their stay.”

Mr. Gomez, the sewing instructor who has been instrumental in setting up the sewing center in the prison in Curacao and has years of service in the Point Blanche prison sewing center stated: “I feel very happy. This is my home, and this is my profession. I will continue to teach the inmates how to sew. I thank Minister Richardson, the management team, and supporting staff for this opportunity.”

During the ceremony Minister Richardson was joined by the interim director Mr. Bell, the prison management team, and Mr. Gomez for the ribbon-cutting, which marked the official (re)opening of the sewing center.

The sewing classes will resume as soon as possible which will yield positive results very soon. This is one of the many programs that the Minister is dedicated to (re)establishing at the prison. Other programs and initiatives such as the GED lessons, cooking lessons, improving the gym and library areas with fresh paint and equipment are presently being worked on.