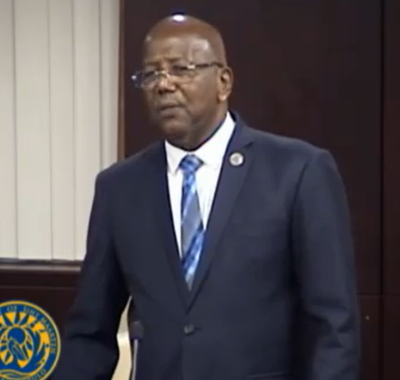 PHILIPSBURG:--- Faction leader of the National Alliance William Marlin posed several questions to the Minister of VROMI Egbert Jurendy Doran regarding the Vineyard Heights land allotment.
Marlin asked the Minister if it is the government's intention to create a “gated community” at the Vineyard Heights location. Marlin wants to know if government is planning to develop the area. He said that is the impression he gets from the documents he has seen thus far. Is the government developing a gated community?  if that is the intention then he wants to know if this development will only have 25 homes or all buildings at Vineyard Heights will be included.

Marlin further explained that based on the documents that he has seen floating around on social media he gets the impression that a Homeowners or Property Owners Foundation or Association will be created. He said that if this is the case then the Minister of VROMI must inform Parliament fully. The National Alliance founder and the former leader asked if this is a policy that will be used going forward. Marlin asked if there will be an association or foundation fee and if such will create a financial burden on these homeowners.

Marlin asked if there will be individual lots or will there be high rise and if those will also be part of the homeowners association if one is created.
Marlin asked the Minister to provide parliament with an overview of the amount of land rent that is paid to the government throughout St. Maarten. He made reference to a situation where land was given to a developer for one cent per square meter some time ago, that developer has been minting money from the land he received in long lease yet government is not able to get its fair share out of it. Marlin further explained that prior to the country attaining its status in 2010 a commissioner increased the long lease rent on the ‘small man’ living in areas such as St. Peters and South Reward, residents he said are paying NAf130 to NAf 150 per house lots annually while residents in Sucker Garden and FOGA have to pay as much NAF 6000.00 annually.
Marlin further asked if there is a cap placed on the long lease and if it is valid for a period of 5 years. He asked the Minister if there is no cap in place if government will consider placing such to prevent a “Minister” from going rogue by increasing the long lease land rent on residents.

Leaked Documents.
The National Alliance Faction leader expressed concerns about the government documents that have been circulating on social media. He said it is disturbing to see government documents in the public domain.
Marlin wants to know if these documents are authentic, and if they are then he asked the Minister to explain the leaked documents about the bidding that seems strange. Marlin asked if the contractor that prepared the rendering to for the Minister was promised something bigger since he did not partake in the actual bidding process. The NAF 3000.00 price tag seemed strange compared to the actual cost for such work.

Parliament building.
Marlin informed the Minister that St. Maarten cannot continue to experiment. He said that the Parliament of St. Maarten was forced to sign yet another lease for the location that is housing the parliament of St. Maarten. He said the first lease was from 2010 to 2017, then 2017 to 2021, and just recently parliament signed another lease that will run until 2024. As such Marlin asked the Minister if intended to use the Pondfill location for the construction of a Parliament Building.

Marlin said the location does not fit the parliament of St. Maarten. He said he is part of the committee that is working on getting a parliament for the country St. Maarten. Marlin said that that committee already met with the financiers that are willing to finance the building that will house the parliament of St. Maarten and the High Council of State.
Marlin made clear that depending on the responses provided by the Minister he will be tabling a motion. He said at the closing of parliament he announced that there will be changes since he could not obtain answers from the government he supports. Those changes he said include calling meetings, asking questions as well as tabling motions when necessary.

The National Alliance Faction leader asked the Minister to provide clarity on whether or not he submitted a request on behalf of the SMHDF to obtain financing for the construction of homes and repairing of homes.
Marlin said that he took note of the statement that was released by the steering committee and when he queried with the Prime Minister he was told that a file was in fact submitted.