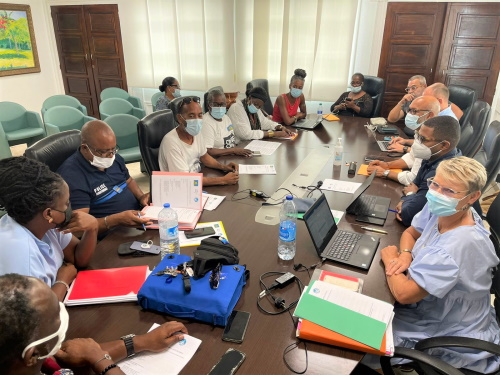 MARIGOT:--- After three months of mobilization of the Territorial Union UNI.T978, a conflict suspension protocol was signed this Friday, October 8, 2021, between the President of the Collectivity of Saint-Martin, Mr. Daniel Gibbs, and the UNI.T978 and UNSA Territoriaux unions, the latter having rallied during the strike notice of August 2.
This protocol, which provides for the implementation of concrete actions in favor of territorial agents, occupational health, and social relations within the institution, suspends a strike that has hampered the proper functioning of territorial public action. over the past thirteen weeks.

Always wishing, since the start of the strike, to guarantee the agents a return to serenity and appeasement, the President had proposed to the strikers, Monday, October 4, 2021, a resumption of dialogue with a view to reaching a favorable outcome. . This proposal was accepted by the union UNI.T978.

The meeting was held on Thursday, October 7 in the morning at the Hôtel de la Collectivité, in the presence of President Gibbs, the Deputy Directors General (DGA) of the COM, and delegations from UNI.T978 and UNSA Territorial. This exchange confirmed the principle of signing an end-of-conflict memorandum of understanding the day after this interview.
At the end of a session that will have lasted more than two hours this Friday, October 8, 2021, a protocol for the suspension of the conflict was signed; the unions indicating that they have not obtained a certain number of guarantees which will be the subject of a working session in the coming weeks in inter-union training.

The situation of the Director-General of Services (DGS), Christiane Ayache, was the subject of a sticking point, strikers ordering her "immediate departure" since July 2.
As a result of these long months of conflict, Ms. Ayache finds herself in a statutory position which henceforth requires an alternating interim, provided by all the Deputy Directors General (DGA).

With regard to claims relating to well-being and health at work, the Management Committee of the Collectivity has proposed several concrete actions on these priority issues, in the continuity of the work already undertaken in recent months and still is a concern for appeasement and a way out of the crisis.
The creation of a social relations charter was thus proposed to the unions, in order to promote the conditions for a more co-constructed relationship, and falling primarily to the service of the agents of the COM of Saint-Martin.
At the same time, thematic working groups, open to all trade union representations, will meet on a proposal from the Management Committee of the COM, to work collectively on five major axes:

• The reconstitution of the careers of the agents (advancement, job descriptions, and annual evaluations);
• Occupational health (agreement with the CIST, psychological support for suffering staff, medical committee for returning to work);
• Telework and On-Call;
• The development of a single occupational risk assessment document;
• Improving the working conditions of COM agents;
• The creation of a Social Relations Charter to improve the relationship between administrative management, union representations, and local agents. This Charter is intended to last over time.
The results of the work of these working groups will be carried out within the employee representative bodies.

Anxious to maintain an openness to dialogue since the start of the conflict, President Daniel Gibbs said he was relatively satisfied with this suspension of the conflict.
The President however recalled that the majority of the points appearing in the platform of demands of the Territorial Uni.T978-UNSSA had already been the subject of in-depth work by the administration and of concrete responses provided from the start of the conflict. And this, beyond the questions of people, which cannot be the subject of trade union action.

According to the President:

“The end of the crisis was urgent, there is still too much to do in this territory!
Mistakes, blunders, and misunderstandings, on all sides, must be used as experience so that such a scenario never repeats itself.
While we are still going through unprecedented health, economic and social crisis, that our Territory, unfortunately too often caricatured and mistreated, has been in upheaval since IRMA, only the values of fraternity, sharing, dialogue, and mutual respect owe us animate: All our energies must, therefore, converge towards the construction of a solidary, fraternal, united Saint-Martin society, proud of its diversity, like our territorial institution.
We need, beyond our differences, the commitment of everyone, in order to best defend, in the months and years to come, the interests of Saint-Martinoises and Saint-Martinois ".