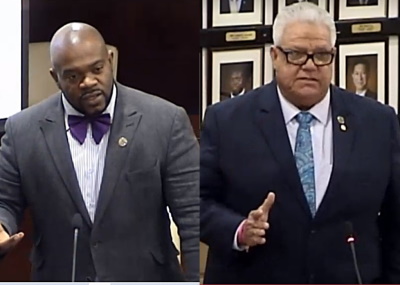 PHILIPSBURG:--- Members of Parliament Christophe Emmanuel and Claudius Buncamper in a joint press release on Sunday stressed that the proposed Consensus Kingdom Law (Rijkswet) on Data Protection, if passed as currently intended, is tantamount to abuse and it must be stopped dead in its tracks. Both MP’s said that the Government of St. Maarten needs to deal with the matter in a transparent manner and consult the public “so our people know what you are intending to do by literally subjecting them to more privacy issues.”
The MP’s were reacting to a presentation to Parliament made by Minister of Justice Anna Richardson last week, which was basically the same information provided to MPs and others at a session held at the Simpson Bay Resort earlier this month by the three-person committee that is slated to head a so-called Independent Supervisory Authority.

The countries in the Kingdom have jointly decided to harmonize Data Protection in the Caribbean part of the Kingdom by a Consensus Kingdom Law as outlined in the approved country packages. Preparations are being made to start with the actual drafting of the Consensus Kingdom Law.
MP Buncamper and Emmanuel made it clear that they are not against the protection of personal data, breaches, and misuse. However, two concerning issues became clear from the Minister’s presentation; The Caribbean countries of the Kingdom will have to submit tax, medical and other personal information for protection to the Netherlands to be supervised by the aforementioned independent supervisory authority with far-reaching powers. “Yet another Dutch imposed entity for St. Maarten to deal with,” MP Emmanuel said.

Secondly, “the Netherlands isn’t part of the law of data protection as they have their own setup. If the Netherlands wants a consensus law, then they too should be part of the law and replace what they have and make their data available to country St. Maarten just like we have to make to them. Anything other than that is not acceptable and will not carry my support for a consensus kingdom law,” MP Buncamper said.
The MP’s stressed that they cannot support providing the personal data of St. Maarten citizens to third parties for possible judicial reasons which aren’t regulated by law. “The Dutch government will have our data and can disseminate it to anyone internationally and we don’t have the same rights like them. Non-equality once again showing its ugly face,” MP Buncamper said.

MP Emmanuel said the presentation by the Justice Minister is the latest example of why the country packages needed to be discussed in-depth by the Parliament of St. Maarten, but were instead rushed through by the government by providing vague and empty answers to the concerns of the MPs.
“The Minister’s presentation was the first time that I was seriously worried and scared for St. Maarten. This government is just giving everything away. The country signed off on country packages without even understanding the implications of every point in those packages. We have laws that can be used to obtain information needed for any kind of investigation. Yet we are expected to support giving away personal information to Holland and an entity with independent powers? Never,” MP Emmanuel said.

The MPs also questioned why not simply appoint a local body to overlook these matters for St. Maarten. “That notion has apparently been dismissed since the counter-argument being used is that considering the fact that a Kingdom Law is currently being established with a regional supervisory authority, it will be pointless to establish a local supervisory authority. Imagine that. So the discussion seems to be a forgone conclusion. Once again, this government is using the Parliament as a rubber-stamp for the Dutch and its intention through the country packages,” MP Emmanuel said.
MP Buncamper added that the country signing off the country packages without understanding the implications is exactly what happened with 10-10-10 “and today we have to deal with those mistakes. I will not be part of these shenanigans for money. And those that demand these types of conditions should be prosecuted for blackmail,” he said.

The entity that Emmanuel referred to, the so-called supervisory authority, will carry out its duties in complete independence. It will act completely independently in the performance of its duties and the exercise of its powers and will remain free from all or no direct external influence and will not ask nor take instructions from anybody. It will have its own and self-selected staff, who are under the exclusive management of the member or members of the supervisory authority.
Important to note is that during the presentation a Simpson Bay Resort, the members of the intended supervisory authority could not provide an explanation on how their independent and far-reaching authorities conflict with the Kingdom Charter and Holland’s role in the Charter in specific cases.

Both MP’s said there are fundamental questions that must be asked. Including but not limited to; why would medical and tax information for example need to be given to the Dutch for protecting? Why would St. Maarten want to have a regional council established to oversee its people, businesses and institutions for data breaches “and give them unchallenged powers to punish us”, why isn’t government truly involving “our own people” in setting up these frameworks and making the law instead of having three non-St. Maarten people dealing with this project? Why is there such a rush to have the law completed and implemented within 18 months? If St. Maarten doesn’t agree what happens then? Why do we need to ask the Netherlands to make any adjustments to a law of which they aren’t part of? Who will pay for all of this as we cannot even handle our basic costs presently?