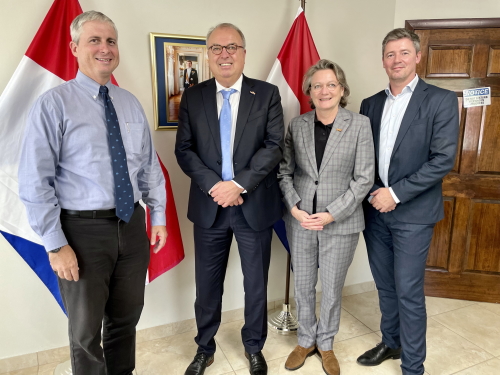 SABA:--- A delegation of the Chancery of the Netherlands Orders paid a visit to Saba on Thursday, November 25. A meeting was held with Island Governor Jonathan Johnson to discuss, among other things, the nomination of Saban candidates for a Royal Decoration.

Member of the Chancellor of the Netherlands Orders Peter van der Velden said it was important to also give recognition to those persons in the Dutch Caribbean who contribute in an excellent way to the local communities. “People are doing good work with very limited means,” he said.

In particular, on Saba, more people should be recognized for their good work with a Royal Decoration. “We are sure that there are people who deserve this. It is a pity if people don’t get rewarded for the good work that they do. We had a very good meeting with the Island Governor and we talked about how the Chancery can assist in accomplishing this,” said Van der Velden.

Island Governor Johnson said that the Public Entity Saba will be working on the internal process to submit nominations for a Royal Decoration. The Chancery of the Netherlands Orders visited Saba for the last time in 2014.

Director of the Chancery of the Netherlands Orders Martine van Grieken and Head of the Department of Advice and Decorations Mischa Vos, who was part of the visiting delegation, pointed out that everyone can come forward with a candidate who in their opinion deserves a Royal Decoration. The three-member delegation of the Chancery will also visit St. Eustatius and St. Maarten.