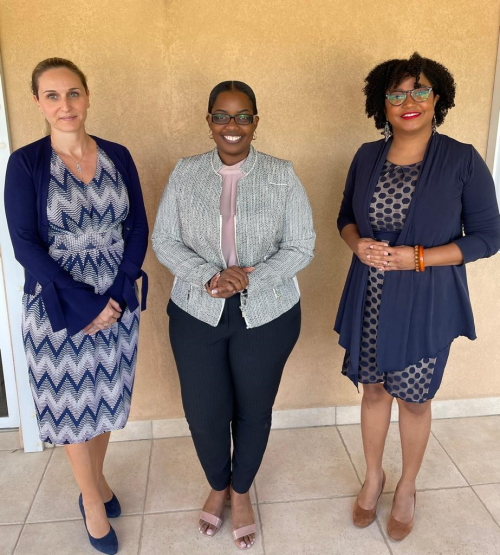 PHILIPSBURG:--- During late November, the Minister of Justice Anna E. Richardson engaged in a fruitful meeting with Algemeen Pensioenfonds Sint Maarten (APS) Director Nadya Croes-Van Putten and a member of her staff to discuss the Ministry of Justice’s interest in acquiring Justice Substations throughout St. Maarten, possibly financed with the help of APS. During the engagement, Minister Richardson relayed her intention for the Ministry of Justice to purchase a property in the Cul de Sac district establishing the first substation.

APS is discussing the purchase of the subject property under the lease-to-own agreement with the Government, with the understanding that the property will be developed (repurposed) by Government as the Justice Substation for district Cul de Sac. The intention is to develop a Police Substation on the lower level of the building and the upper-level apartments would be used for various needs of residential space within the Ministry of Justice. As this was the first time the Minister of Justice and APS have ever engaged in discussions, both Minister Richardson and Director Croes-Van Putten are very enthusiastic about the possibilities being pursued a safer Cul de Sac.

A request for APS’ backing and assistance was formally submitted by Minister Richardson in October 2021. In the request, the steps for initiating the procedure for the establishment of a DBOOT (design, build, own, operate, and transfer) agreement and the acquisition of a lease to own agreement with Government for a building that can function as a Justice Substation in Cul de Sac were specified.

Based upon the 2011 Census, the district of Cul de Sac comprises the 3rd largest of the 8 districts of Sint Maarten, measured in terms of population size and the number of dwellings. Furthermore, the district contains the largest number of schools, especially secondary schools, in Sint Maarten, as a result of which, the large majority of school children on the island travel by bus or otherwise on weekdays to and from this district. The latter results in the highest density of young persons within the district in peak hours of a given weekday, with accompanying traffic congestion. There are also many businesses established along the main roads in Cul de Sac.

Based on an assessment of feasible potential locations for a substation, the Ministry identified the location of the commercial and residential building at the intersection of L.B. Scott Road and Cupper Drive as ideal. The location is central in the Cul de Sac district, along the main road, near to the most densely populated areas of Cul de Sac, and at an intersection with a high gathering of school-going population.

“As the Ministry of Justice continues to seek methods of becoming more efficient, collaboration with other institutions remains of utmost importance to maintain order and a safe St. Maarten for our community and visitors. With the establishment of a Police Substation in the Cul de Sac area, our Police force will be empowered to tackle youth delinquency and reduce the number of frequent incidents of police calls to this district. As such, the Government is willing to enter into a DBOOT and lease agreement for the property with APS, as a means of bridging over the current lack of investable funds until the Government has the financial capacity to carry this investment on its own,” stated Minister Richardson.