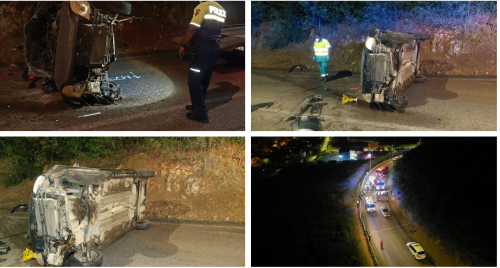 PHILIPSBURG:--- For the last few weeks, the Police Force of Sint Maarten KPSM has registered a sharp increase in the number of accidents resulting in injuries or death.

KPSM’s Traffic Department is conducting an investigation into the eighth road fatality for the year. The incident occurred this early morning, December 3, 2021, on G.A. Arnell Road (Link 1, Phase 2) when the driver of a Suzuki Swift, traveling at what is estimated as very high speed toward to roundabout on A.J.C. Brouwers road, lost control of his vehicle.

He swerved all the way to the left road shoulder, slammed against the hillside rocks flipping the car over. The driver, who was not wearing his seat belt, was thrown from the car and ended up underneath it when it rolldown on him.

He was extricated from under the vehicle by the Fire Department and received first aid from paramedics. However, he subsequently succumbed to his very serious injuries.

KPSM expresses condolences to the family and friends of the deceased F.A.M.A.

Police again warn drivers about their behavior in traffic. Since serious accidents keep happening and because of the severity of the damages caused may and have resulted in the death of persons using the public road.

We have noticed an increase in risky behavior by certain groups of road users, which is causing concern for the safety of the general public. One of the issues that has we are drivers not adhering to the speed limits and driving/riding in such a way that it is obstructing safety and free flow of traffic.

Speeding is the second most common cause of road accidents. Since cars, motorcycles, and truck accidents that involve speeding typically occur at high speeds, it is also a major cause of serious or fatal road injuries.

Driving above the speed limit is a common practice for many motorists. In addition, illegal behavior vastly increases the risk of losing control of a vehicle and causing an accident

Even a small increase in speed can result in a much higher risk of being involved in a collision or other type of accident. As such, it is essential for motorists to be aware of the speed at which they are traveling and stay within the legal limits.

Speeding, changing lanes without looking, hopping scooters and motorbikes, and ignoring road signs are all classic signs of reckless driving. An illegal driving habit’s now one of the most common causes of road accidents on our island

Reckless driving usually involves a motorist that is less concerned about other road users than they are.

After having looked at the reasons why vehicle accidents happen, an overview was done into the location on the island where most vehicular accidents take place.

Through this information, the Sint Maarten Police Force would again like to caution road users. A lot of the accidents happening can be avoided if everyone drove not only for themselves but also for the cars around them. Take heed the roadways are not your own avoid unnecessary collisions.

The Police Force will continue to work towards keeping Sint-Maarten roads ways safe but it is a job that cannot be done without the help of the community. In many cases, easy safety measures can be taken to prevent unnecessary accidents.