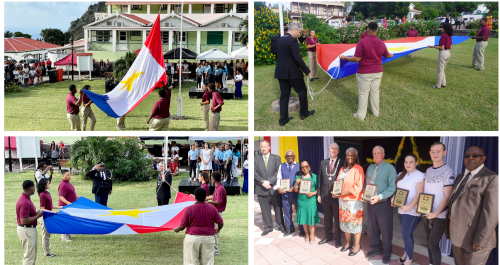 The people of Saba, dignitaries and invited guests came together for the official ceremony on Friday, December 3 for Saba Day 2021. It was an event of positivity where gratitude was expressed for keeping the island safe during the COVID-19 pandemic and the 2021 hurricane season, and Saba’s successes were celebrated.

After the customary hoisting of the Saba flag and the singing of the national anthem and the Flag Song in front of the Government Administration Building in The Bottom, people walked to the Juliana’s Sports Field for an ecumenical service with praise, prayer, and song. MC Elsa Peterson opened the official ceremony and welcomed everyone to the 46th annual Saba Day celebration with a theme: “Adopting a positive mindset amidst a changing world.”

Commissioner of Culture Rolando Wilson reflected on this year’s theme. “A positive mindset in a changing world might seem a difficult topic, but it simply means that we as a people have to acknowledge and accept that changes are here and more will be coming. We have to prepare ourselves if we are to overcome and survive in this changing world. We must have a strong voice in contributing to what is happening to our island and we must have a positive mindset in how we handle our affairs,” he said.

Wilson looked back at what he called a “remarkable year” in the middle of a pandemic. “We have much to give God thanks for. Most of our people were kept safe and spared from this deadly virus. Our economy remained intact for a great part, people did not lose their jobs and businesses were able to survive. This could not have been possible without the financial assistance from the Dutch Government which allowed local government to assist businesses to offset the losses. It also enabled us to carry ou8t a number of social and infrastructural projects.”

Wilson reminded the people that the pandemic was still ongoing. “We are not out of the woods and we should not drop our guards. The pandemic is still a reality and can impact us at any time. With the new variant, we must keep the attention and adhere to the established protocols. As we look forward to the year ahead, let us do so with bold confidence and much optimism. Each of us has a role to lay in our island’s development. This can only be achieved through hard work and togetherness form each one of us. As we move forward, let us collectively work along with our sister islands and the Dutch counterparts to further improve our relations.”

Commissioner of General Affairs Bruce Zagers said that while many of Saba’s successes could be directly traced to the decisions, work ethic, mindset and forward-thinking attitude of Saba’s ancestors, and it was important to preserve the local culture and heritage, it was also vital to find a balance where there is room for development in both the social and physical domains.

Change is a given, but not all change has been good, said Zagers, who mentioned the high cost of living and increased poverty since Saba’s transition to a Dutch public entity status in 2010. “Families that earn wages below a livable standard, and we know there is poverty, albeit for the most part it is hidden. We can relate to an economy that barely recovered from the hurricanes of 2017, only to be hit three years later with a complete shutdown. We feel the consequences of a free allowance which is too low and is negatively impacting services provided by government. We are challenged by bureaucratic systems, inadequate banking opportunities and the feeling that too often decisions are being made about us but not with us.”

But the change has also brought many positive things which have provided growth and opportunities for Saba and its people, said Zagers. Projects such as the new fire station, a solar park, agriculture initiatives, a remodeled tourist office, a botanical garden, a new hotel that will open shortly, the Saba Splash Bottling Plant, the eventual expansion of the school buildings, the planned upgrades at the Johan Cruijf Court, the second phase of social housing Under the Hill, the planned expansion of the elderly home and the new harbor project which will start in the latter part of next year.

Zagers gave credit to the Public Health Department and its vaccination campaign which put Saba on the map for probably having the highest vaccination rate in the world, government’s financial management team that continues to produce at a very high level, the Saba Conservation Foundation which is also involved in research projects and spearheading a marine lab, and the BES(t)4Kids program which continues to invest in teachers and caregivers.

Island Governor Jonathan Johnson said that change and transitions, even though difficult, were part of the process of life. “The most repeated phrase in the Bible is ‘Be not afraid.’ This does not mean that we should carelessly and recklessly go through life, but we must act with love,” he said, emphasizing the importance of loving one another.

Johnson expressed concerns about bullying at schools and in society, and people acting adversely towards other. “The primary language of children is behavior, not words. That is why we as adults must model good behavior. Scolding children teaches them how to scold. By showing them to understand, we teach them to understand. By helping them, we teach them to help. We have to care about other people’s children. We have to care about everyone. Because eventually, the cost of our callousness will be borne by our children.”

Friday’s official ceremony included performances by grade 2 and 6 primary school students, a cultural display by students, and dance by children of Child Focus. The well-attended event was closed off with a toast and a public reception with food, cake, and drinks. Afterward, people visited the many booths on Matthew Levenstone Street in The Bottom. Festivities will continue throughout the weekend.