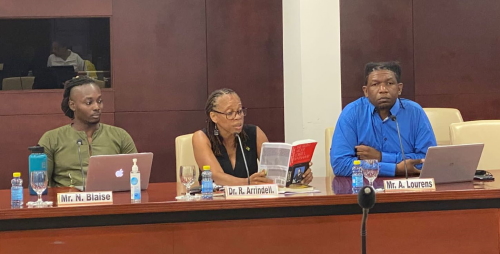 PHILIPSBURG:--- The ONE SXM Association met with the Ad Hoc Committee for Electoral Reform of the Parliament of St. Maarten on Tuesday, March 1 to submit a draft resolution calling for a consultative referendum within two years, or latest simultaneously with the next parliamentary election.
The ONE SXM Association implored the Parliament of the southern part or Dutch territory of the Caribbean island of St. Martin, to make use of its constitutional authority to convene the referendum with the sole question of “Independence: Yes, or No?”
Giving the presentation was Dr. Rhoda Arrindell, Mr. Alston Lourens, and Mr. Nelly Blaise, while Mr. Theophilus Thompson was also present.
According to Arrindell, the ONE SXM Association is not a political organization, and it was not the first organization to call for a new consultative referendum on the matter of independence for the territory.
Arrindell said the Independence for St. Martin Foundation appeared before Parliament in May 2016 with the same plea and wrote a petition upon advice of some Members of Parliament at the time.
Arrindell reminded Members of Parliament (MPs) that Aruba had carried out a similar referendum with the same question in 1977, so there is a legal precedent.
Nelly Blaise emphasized the importance of youth empowerment and involvement in the future of the island, and added that “a consultative referendum given to the people is a democratic process and should be coupled with a mechanism for public discourse.”
For the most part, the MPs present agreed that the people should be consulted. UP leader, MP Rolando Brison (UP) said that a consultative referendum is the highest form of democracy. He posed several questions to the ONE SXM delegation, which were answered by Alston Lourens.
Brison further stated that the MPs could at least agree on the need for a referendum and consult organs such as the Advisory Council for legal advice on how to proceed and make it happen.
Addressing the session, MP George Pantophlet (NA) said that he believed that independence is the way to go.
Both MPs Sarah Wescot-Williams (UD) and Raeyhon Peterson (PFP) acknowledged the competence of Parliament to convene a referendum but noted that the Constitution only provides for a referendum to be held on a decision that has already been taken.
However, MP Melissa Gumbs (PFP) said she had no issue with a consultative referendum and suggested that students abroad should be allowed to vote in it, adding that the voting age could be as low as 15.
MP Ludmila Duncan (NA) said that everyone could agree that the territory’s autonomy had been trampled upon and said it was time to consult the people on their views on independence.
Arrindell quoted from the United Nations Declaration on the Granting of Independence to Colonial Countries and Peoples, which states that “inadequacy of political, economic, social or educational preparedness should never serve as a pretext for delaying independence.”
She further said the question before Parliament should be whether the MPs believed in consulting the people or not and if so, to do it. On the contrary, she asked who was Parliament accountable to.
Arrindell concluded that the ONE SXM Association was looking forward to doing its part in helping to bring about the referendum on the critical issue of independence for St. Martin.
The following is the full text of the Draft Resolution proposed by ONE SXM Association and submitted to the territory’s Parliament:

“Parliament further resolves that the referendum shall have one question: Yes or No to independence for Sint Maarten.