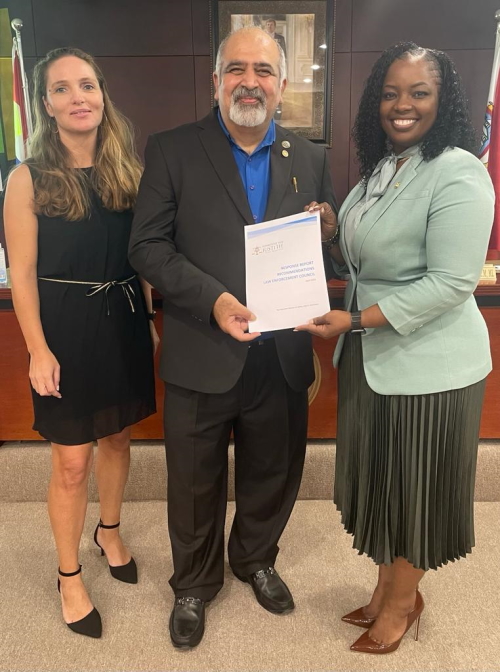 Since its establishment on July 7, 2010, the Council has been diligently carrying out its duties and published a large number of inspection reports. In their reports, the Council makes recommendations to the Ministry of Justice in general and to Justice entities in particular. Compliance with the imposed recommendations will aid in making the desirable improvements to the current situation in relation to the scope of their inspection.

Minister of Justice, Anna E. Richardson stated, “Since taking office on March 30, 2020, I have been committed to making structural improvements within the Ministry of Justice and in the field of Law Enforcement in St. Maarten. I am of the strong notion that the work of the Council is essential and is of great value in realizing these improvements. It is therefore disappointing to know that in the last eleven (11) years the recommendations of the Council have not been given the attention that they deserve.”

“It is understandable that noncompliance to the recommendations was partly caused by a lack of financial means, expertise, capacity as well as political stability. However, to make the desired improvements within the Ministry and the Justice chain, a more proactive approach by our Ministry will be necessary. Compliance to recommendations of the Council, but also to the recommendations of the Progress Committee, Integrity Chamber, and the European Committee for the Prevention of Torture and Inhuman or Degrading Treatment or Punishment (CPT), is essential in this,” Minister Richardson continued.

This proactive approach was initiated by Minister Richardson and the Department of Judicial Affairs in September 2021. The Department of Judicial Affairs assessed all the recommendations of the Council that has not been fully complied with. These recommendations have been discussed with the Management of the various Justice entities. Creating awareness of the pending recommendations and making compliance a shared responsibility between the Minister, Secretary-General, and the Management of the Justice entities can be considered the first two imperative steps in this process.

Based on the Kingdom Law on the Law Enforcement Council (Rijkswet Raad voor de Rechtshandhaving), the Minister of Justice is obligated to inform Parliament about the published reports of the Council and to provide a response to the recommendations made by the Council. Subsequently, the Council receives a copy of the letter submitted to Parliament. Unfortunately, these responses to Parliament have been lacking since 2010.