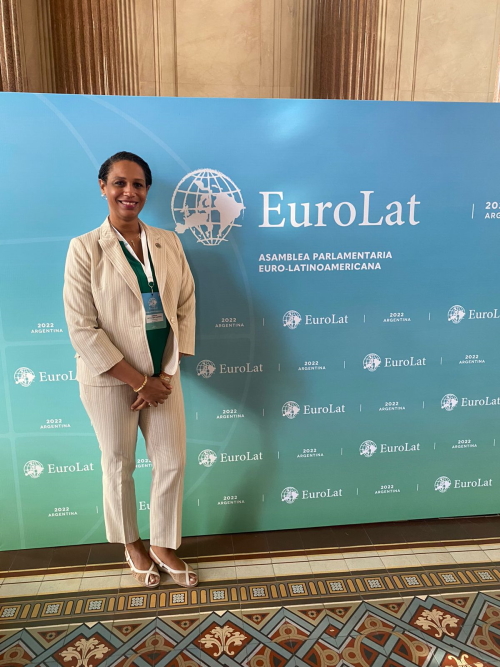 PHILIPSBURG:--- Right after having represented Sint Maarten at the “International Workshop of Scholars and Parliamentarians” in Patagonia, Argentina, President of Parliament Grisha Heyliger-Marten attended the EUROLAT General Assembly plenary sessions in Buenos Aires.

The EUROLAT is a multilateral parliamentary assembly, consisting of 75 members from Latin-American and Caribbean regional parliaments, and 75 members of the European Parliament.

During the sessions, formal decisions are taken on operational matters including appointments, the approval of the budget, and the adaptation of resolutions. The plenary sessions of the General Assembly are preceded by committee meetings covering subjects like sustainable development, social development, political affairs, finances, and economic affairs.

According to Heyliger-Marten, the real added value of attending the sessions for St. Maarten lies in the opportunity to meet influential parliamentarians from both sides of the Atlantic in formal and informal settings. “As was the case during the Parlatino meetings in March and the workshop in Patagonia earlier this month, I was able to personally explain the challenges St. Maarten and the other Dutch Caribbean islands currently face within the Kingdom” according to Heyliger-Marten.

In a press release issued Tuesday afternoon, Heyliger-Marten stated that she was very encouraged and inspired by the understanding and support she received when she pointed out the bottlenecks in the relationship with the Netherlands.

“According to a number of senior Parliamentarians that I spoke to from this region and from Europe, the Government of the Netherlands has created a perception of humanity, compassion, and respect for international law. They were therefore astonished when I told them about the intentions of the Dutch Government to pass a COHO law which infringes on the autonomy of the islands, and that the CERD issued recommendations related to this in August of last year”, Heyliger-Marten said.

She also updated her fellow Parliamentarians on the status of the petition filed with the United Nations’ Special Rapporteur on Contemporary Forms of Racism, Racial Discrimination, Xenophobia, and Related Intolerance “ and “Working Group of Experts on People of African Descent”.

“I am very pleased that both EUROLAT and PARLACEN indicated that they are willing to formally table the issue of the constitutional relationships within the Dutch Kingdom during their next General Assemblies”, she stated.

“PARLATINO and COPPPAL (The Permanent Conference of Political Parties of Latin America) have both issued resolutions in support of the Dutch Caribbean islands during the past few years. I look forward to the formal support from PARLACEN and EUROLAT for St. Maarten’s quest for constitutional reform and UN-based capacity building during the course of this year as well”, said Heyliger-Marten.

According to Heyliger-Marten, dialogue based on absolute equality is the only way for the Netherlands to engage the Dutch Caribbean in order to bring the required constitutional reform about and ensure that the Kingdom Charter (het “Statuut”) is finally brought in line with international law.

“In June of 2020, I suggested a Round Table Conference for all Kingdom partners as the first phase of dialogue towards constitutional reform. In August of 2021, the CERD also recommended the Netherlands start a dialogue with the Dutch Caribbean islands. And more recently, both Prime Minister Pisas and Aruban MP Mike Eman called for a Kingdom or Round Table conference”, Heyliger-Marten stated.

“There is no reason to wait. It is now time for activities that will benefit the people of St. Maarten in the long term. As such, I will be dispatching a letter to the Prime Minister regarding the matter of the COHO trajectory, capacity building, and constitutional reform based on the de Graaf and van Raak motions this week, and look forward to a speedy reply and follow-up.

With two IPKOs coming up and the support of international and interparliamentary organizations, I am very hopeful that 2022 will be a year of significant progress for St. Maarten and its Dutch Caribbean sister islands”, Heyliger-Marten concluded.