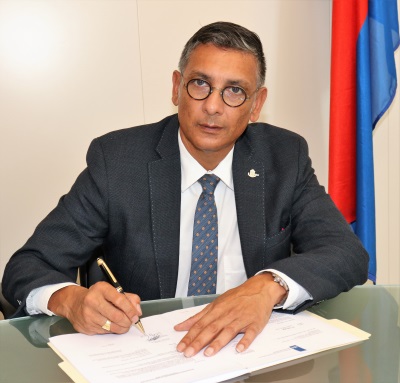 It wasn’t long ago that participation in the crypto markets was limited to individual early adopters. Today, Bitcoin and cryptocurrencies can be found everywhere, and the crypto-economy is expanding and becoming a truly global financial system.

Entrepreneurs from around the world are motivated by a Bitcoin-Blockchain ideology and have joined friendly jurisdictions like Switzerland, Puerto Rico, and Miami. These are the world’s first successful crypto-friendly jurisdictions supporting innovation and helping bridge the financial and crypto worlds together.

In September 2021, El-Salvador became the first Sovereign-States to legalize Bitcoin as legal tender, purchasing over 1800 Bitcoin for their treasury. Two weeks ago during the Bitcoin Conference in Miami, the largest of its kind in the world to date, which was attended by 30,000 (!) people, the autonomous Portuguese archipelago known as Madeira recognized Bitcoin as legal tender and the Caribbean island off the northern coast of Honduras known as Roatan has officially recognized Bitcoin as legal tender as well and crypto as a form of money and announced the creation of “Prospera”, a special economic zone for this purpose.
Senator Indira Kempis Martínez of Mexico, present at the same conference, announced that she was working on legislation that would make Bitcoin legal tender in her country because a third of adults are unbanked and lack access to credit. The Senator already introduced a bill regulating the Bitcoin and crypto markets in her country.

It was the announcement of Senator Martinez that caught my attention, firstly because Mexico is a major trade partner of the USA, secondly, Mexico has a developing market economy, and thirdly it is the 15th largest in the world in nominal GDP and the 12th largest by purchasing power parity, according to the IMF. All in all one could argue that Mexico is a fairly strong economic powerhouse in the region. But still, the Senator declared that one-third of the adults in her country are unbanked and therefore lack access to credit!

Then, recently the World Bank announced that close to one-third (1/3) of adults globally-, or 1.7 billion people- have no bank accounts!
In light thereof, during their Spring Meetings this week the World Bank held a seminar themed “The Digital Revolution”. The reason for them to organize this seminar is because (and I quote)..” the COVID-19 pandemic sent advanced and developing economies into starkly divergent paths—with advanced economies expected to recover fully by 2023 and developing economies expected to lag for years to come. Developing economies have nevertheless embraced innovative digital solutions that are enabling economic transformation and putting them on a path toward green, resilient, and inclusive growth. Private and public investment in digital solutions is bringing critical services to the poorest, creating jobs, strengthening small and medium businesses, enabling trade and services, and building resilience to shocks. At the same time, more than half the developing world remains digitally unconnected, and risks around privacy and cybersecurity are growing worldwide” (end quote). The purpose of this event was to explore how countries can boost growth, productivity, inclusion, and resilience as they recover by embracing private sector innovation coupled with enabling government policy.
Taking all these very fast-moving developments into consideration, it made me wonder how Sint Maarten could and/or would fit in. It is my understanding from news in the media that Sint Maarten is getting ready to make its first steps into the world of crypto and blockchain technology applications.
One of the reasons I would applaud such developments for Sint Maarten is the mere fact that like countries such as Mexico and the rest of the developing countries, we also have quite some residents who are unbanked for years, and therefore have poor or no access at all to credit and other common banking facilities, whilst at the same time, those residents and businesses who have bank accounts, for years now, are complaining about “expensive” and excessive bank fees, expensive interest rates, difficulties acquiring credit facilities and the need for better and more professional and efficient customer service. The entry of crypto-currency as legal tender and blockchain technology can make a difference in mitigating these deficiencies and making our society more inclusive.
In Curacao, the establishment of so-called FinTech companies is on the rise the mere fact that there also is a need for fast, efficient, and cost-effective financial transactions such as the transferring of money, but also for saving, investing, and loan processing facilities. A FinTech company makes financial services more accessible to the greater public, but it also encompasses revolutionary financial technologies like blockchain and cryptocurrency.
On December 2, 2021, the Central Bank of Curacao and Sint Maarten (CBCS) in collaboration with our Minister of Finance, Ardwell Irion, organized a conference under the theme of “Building Value with Emerging Technology”. The conference was meant to give an insight into the blockchain, crypto, and other emerging technologies, the applicability of these technologies in the financial services and hospitality industries, combined with the regulatory adaptability through which the CBCS is of the opinion that a more vibrant economy can be created.
Member of Parliament, Rolando Brison, earlier this year shared his support for making a cryptocurrency a legal tender in Sint Maarten. One can indeed say that “The Digital Revolution” is also becoming an irreversible reality for Sint Maarten, and rightfully so.
With the entry of cryptocurrency, but also blockchain technology in Sint Maarten I foresee some positive and much-needed developments, such as the diversification of our economy and education offering, to name a couple.
However, in order to protect our consumers, it is advisable to properly regulate/legislate the entry of the Digital Revolution in Sint Maarten, with equal chances for everyone who wishes to enter into this segment of the economy. It is crucial that the Central Bank is assigned a supervisory role, but of equal importance is also that the Central Bank acts as a partner to the government and stakeholders in Sint Maarten during the introduction phase. If this is done well and in a balanced way, I envision the development of Sint Maarten into a “Crypto-Tech Island” and gaining global recognition in the process.
In closing, if the adoption of the “Digital Revolution” in Sint Maarten could cause inclusive growth, private and public investment in digital solutions bringing critical services to the poorest, creating jobs, strengthening small and medium businesses, enabling trade and services, and building resilience to shocks, I am all for it!

Some known worthy facts; * In the U.S, one in five people holds Bitcoin but in Brazil and Indonesia, the number is close to half of the population. * Thirty Thousand (30,000) people attended the Bitcoin 2022 conference in Miami. * The Mayor of Miami, Francis X. Suarez, converts his salary into Bitcoin every month. * New York Mayor, Eric Adams, took his first 3 paychecks in Bitcoin and Ethereum. * Politicians and Countries from around the world are pushing for Bitcoin adoption.