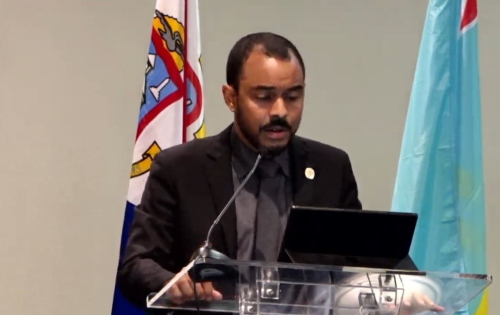 PHILIPSBURG:--- Protocol having been established, I would like to simply say good afternoon, goede middag, bon tardi, to all of you here with us today and viewing online.

It is an honor for me to on behalf of the host country and Sint Maarten delegation at this IPKO to give you a presentation today on the State of Affairs of Sint Maarten.

I would like to pause here to mention MP William Marlin, a veteran politician and mentor to many of us in Parliament, myself included, who is not with us today due to a medical procedure abroad but sends his warmest regards to you all. Wishing you a speedy recovery William, and hurry up come back so you can come back to cooking that delicious pig foot souse.

This presentation consists of 2 parts. Part 1 will focus mainly on what has transpired at the Parliament of Sint Maarten since the last IPKO and the 2nd part will focus on recent developments, finances, economic development, Covid 19, and COHO.

We have seen an increase in the activities of the Permanent and Ad Hoc Committees of Parliament. The Committee of Justice is currently having in-depth discussions and proposals on the draft Penal Procedure Code and the Committee for Constitutional Affairs and Decolonization hosted its first expert round table panel discussion on the Kingdom Charter. Other committees have been very active such as the education committee meeting with education and youth stakeholders, the district councils committee where we hear from the community councils directly, finance committee which is the main point of contact with CFT, Central Bank of Curacao and St. Maarten and the Banker’s association, the integrity committee that is working on a draft code of conduct, health and labor committee that has had various initiatives laws explored and discussed including a senior benefits law and national health levy, among many others.

The Ad Hoc Committee New Parliament Building envisions in the not too distant future have its own building, as opposed to renting the building as we do now. This is seen as more effective to finance a mortgage locally than to continue paying rent.

After much deliberation, the Budget of Country Sint Maarten for 2022 was accepted on January 24, 2022, with a deficit of 124.1 million guilders. There was much debate regarding the manner in which the handling of the Budget 2022 took place. This stemmed from the fact that no approval had been received for deviation from the budget standards prior to its approval as stipulated in the Kingdom Financial Supervision, for which a request was made.

However, the Budget for 2022 was accepted by Parliament and subsequently published by Government on March 30, 2022.

During the handling of Budget 2022, 9 motions were tabled and passed. These motions touched on topics such as promoting the culture and heritage of Sint Maarten, sports, the feasibility of the implementation of a late fee for motor vehicle tax, and filling critical vacancies at the government. There was also a motion recognizing Esports as a legitimate form of sports, which is a growing phenomenon in all our countries. And CBCS facilitates with the creation of consumer banking laws, with the motion acknowledging in its considerations that:
“The banks and their policies have become increasingly cumbersome for banking consumer”. There have also been various amendments presented by MPs to various laws including the national budget. The parliament continues to be very engaged in fulfilling its function as co-legislator, by means of motions and amendments.

The Trust Fund that was established in April 2018 is still in place, and the National Recovery Program Bureau, by National Decree, the Government extended the working time of the Temporary National Ordinance National Program Bureau Reconstruction by two years per March 30, 2022.

You will learn more about the trust fund and the activities during your work visit this week. However, it does appear that the general sentiment amongst the population of Sint Maarten is that the entire bureaucratic process that was chosen for the disbursements of the recovery funds with regard to the aftermath of the hurricanes Irma and Maria has not yielded satisfactory results.

An important motion that was passed by the Parliament in June 2021, was that of the Member Pantophlet which requested the Government to take into the discussion with the Dutch government the topic of debt cancellation. It is important to note here that the current debt of Sint Maarten is currently at 930 million guilders. For perspective, you can more or less divide the guilder figure by 2 to get the Euro amount. There has been debate about the “starting debt of the country” but according to our latest budget under “Staat van opgenomen langlopende geldleningen” I’d like to share some figures:

St. Maarten started with a debt of 304 million in 101010 to the Dutch government, some of which has since been paid off. As a new country in need of significant investment, between 2010 through 2017 (Irma), 320 million in “debt” was accumulated mostly for crucial investments, which is about 40 million per year. Then since 2017, about 600 million was accumulated mostly due to the hurricane and pandemic, unforeseen circumstances that would put any country in the need to borrow. Questions have been raised in debating the debt cancellation motion, as to whether the aforementioned debts should even have been debts in the first place, as some members believe that those investments were an obligation by the Netherlands and should have been grants. Debt cancellation is seen as an important remedy to lower monthly interest expenses, a better debt to GDP ratio, and a more honest financial picture for St. Maarten.

What has also been a major concern is the 12,5% cuts for civil servants that were requested by the Dutch government. It is noteworthy that the Governments are currently renegotiating these cuts and we look forward to a positive outcome regarding this for our people, as these cuts cause significant negative social and economic problems.

I mentioned earlier the improvement of the economy. A lot of that has to do with St. Maarten taking a balanced approach to COVID-19 where we knew, depending on 85% tourism, we could not completely close our country. Our Minister of Health is also our Minister of Labor, so this allowed for a strategy that balanced the need to keep our people safe and healthy, with their ability to provide for themselves.

This has proven to be an effective strategy since St. Maarten has, every quarter since March 2020, exceeded economic expectations. Tying business closures to hospitalizations, a robust vaccination program, recognizing natural immunity to COVID-19, free testing and an expanded COVID-19 unit proved to be a formula that balanced the health of our people with the ability to make a living. For the period where closures were unavoidable, the SSRP was launched to support businesses payroll expenses.

Despite our best efforts to improve the economy of Sint Maarten's increase after the hurricanes and once again after the harsher part of the COVID-19 pandemic, we have needed liquidity support in order to help our situation. At this moment the Ministry of Finance has indicated that Sint Maarten’s financial status is uncertain given the transition we are going through, and while we perform economically better than expected, reserves are limited.

And Although Sint Maarten has been performing financially better than expected, CFT has now asked the Government to cut another 50 million guilders from the 2022 budget instead of looking at reinvesting in our economy or withstanding some social deficiencies that have exacerbated since COVID 19. It is also important to note here that the consensus Kingdom Law Financial supervision was recently evaluated, and the committee concluded that the supervision should continue.

The Parliament of Sint Maarten also received the draft consensus Kingdom Law Caribbean Reform and Development Agency on February 11, 2022. The Parliament, under the guidance of the CKAIR committee, decided to use different instruments in researching this draft that is currently on the table at the Parliaments. We have not only requested advice from our Council of Advice, but we have also requested the Social Economic Council to give their view on it, and we have also had different experts come into Parliament to discuss the pros and cons of this consensus Kingdom Law.

The Government has publicly provided Parliament with a list of concerns that they still have with the draft and some factions have already provided or points of concern or their full position on the draft COHO as is. The Prime Minister has stated in our public interpellation with her regarding COHO, that she felt under duress and pressure to accept the conditions, due to the importance of liquidity support. However, the Parliament of Sint Maarten has not yet taken a position on this draft as yet and we are in the handling phase of the trajectory.

I think it is important for me to repeat the word consensus, and I look forward to our discussions today and tomorrow regarding not only this draft but essentially this type of law and the role that we as Parliamentarians play in this concept of consensus laws. The question can be asked if the planning of the handling of such a consensus law should not also happen in consensus. Nevertheless, we have informed the Second Chamber that we will be sending our report by May 20, 2022."

This then brings me to the end of this presentation. If there are any questions I will be happy along with the rest of the delegation to answer them.

I thank you for your attention and wish you all a pleasant and fruitful remainder of this IPKO.