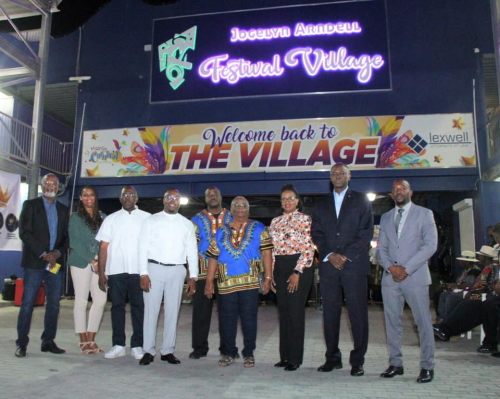 On Tuesday evening May 3rd, 2022, during a ceremonial launch, the unveiling of the Jocelyn Arndell Festival Village sign took place at the entrance of the Festival Village.

The event started with words of welcome by the MC for the evening Mr. Fernando Clark, followed by a prayer by Mr. Harold Richardson.

This was followed by the Sint Maarten Song which was rendered by Mr. Leroy Brooks, known as King Beau Beau.

A heartwarming tribute was rendered by the Honorable Minister of VROMI Egbert Jurendy Doran.

In his speech, the Minister of Public Housing, Spatial Planning, Environment and Infrastructure (VROMI) Egbert Doran highlighted Arndell’s hard work, dedication, and contributions in his function as a Civil Servant as well as towards the cultural development of Sint Maarten often going above and beyond the call of duty to serve his country.

The Minister stated that in 1970 Mr. Jocelyn Arndell and his team were the initiators of the cultural village and festivities that have brought us to where we are today in terms of it being Sint Maarten’s largest cultural festivity.

Minister Doran quoted the late Martin Luther King’s words: “Everybody can be great because everybody can serve” and also encouraged everyone to play their role in serving Sint Maarten.

“If Mr. Jocelyn Arndell had not served, we would not be standing here today,” the Minister stated.

One of the biggest highlights of the evening was the crowd-moving renditions given by four (4) surviving members of the Tanny and the Boys band, of which Mr. Arndell who loved music with a passion was a member for decades where he played the guiro, the marimba, and the accordion.

Representing the family, Mr. Arndell’s son Everard (Ebby) Arndell, stated that his father, although--not seeking any--received various recognitions and awards throughout his lifetime, but that the naming the Festival Village in his honor, was like “lighting the candle on top of his cake.”

He expressed his gratitude to Minister Doran and the team and stated that if he had the opportunity to tell his father that the Festival Village was named after him, his father would have asked him “which great mind came up with that idea?”

The evening continued with more speeches and encouraging words given by The Honorable Minister Samuel, Mr. Kurt Ruan, and Mr. Alston Lourens.

During the unveiling of the sign that stated “Jocelyn Arndell Festival Village”, a beautiful rendition by Mr. Isidore York and Dow’s Musical Foundation was given.
The event closed off with a rendition by King Beau Beau with his song Sint Maarten Sweet, together with the Flag Lady Aishira Cecilia, who was joined by Roadmarch Queen Singing Olivia, Groovy Soca King Magicx, and the 2022 reigning Carnival Queens Talya Panthophlet and Doraniya Pascal.

The Honorable Minister Egbert Jurendy Doran wishes to thank the Council of Ministers, his Cabinet, the Secretary of VROMI and his Team, the family of Mr. Jocelyn Arndell, all participants in the program, and all who made it possible for the event to have been an astounding success.