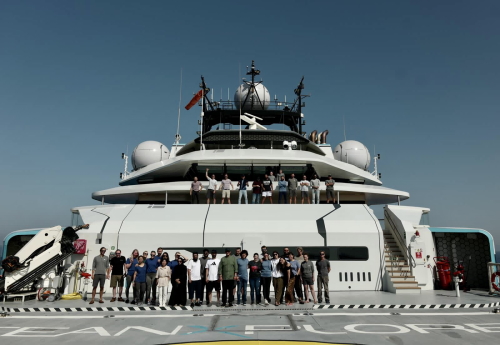 Bervoets, and Dr. Oliver Shippley from Beneath the Waves, were specifically looking at deep-sea shark species in the Red Sea while also testing equipment that will also be launched in the Dutch Caribbean; “we know so very little about our deep-sea resources and the links between deep areas of the ocean and the coastal zones we are more familiar with. This while that likely the deep-sea will play a critical role for small island developing states to be able to help mitigate the impacts of climate change and in terms of maintaining the goods and services provided to coastal communities. That’s why the work being done in the Red Sea is so exciting; we are making the link between deep-sea habitat, coastal habitat, and the importance for holistic management of natural ocean resources as a buffer against the impacts of climate change,” commented Bervoets.
OceanX is an ocean exploration initiative with a mission to explore the ocean and bring it back to the world. OceanX combines science, technology, and media to explore and raise awareness for the oceans and “create a community engaged with protecting them.
King Abdullah University of Science and Technology (KAUST) is a private research university located in Saudi Arabia and is among the 500 fastest growing research and citation records in the world.
Founded in 2013 as a non-profit organization, Beneath The Waves is dedicated to promoting ocean health and using science and technology to catalyze ocean policy. Bervoets is on the Science and Policy Advisory Board for Beneath the Waves in addition to being the Director of the Dutch Caribbean Nature Alliance.