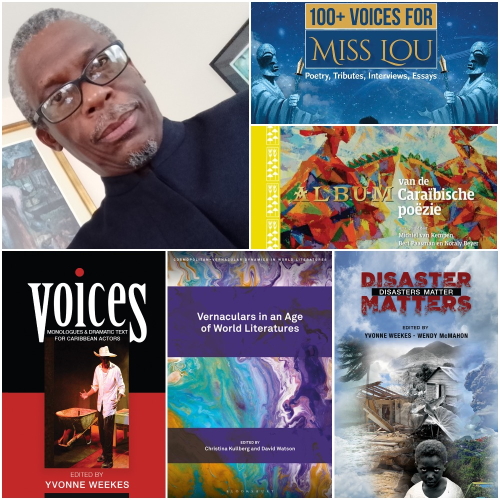 PHILIPSBURG:--- The poetry and drama by Lasana M. Sekou and analysis of his work have been published in five books in Europe and the Caribbean between January and April 2022.
Last January a study of Hurricane Protocol by the St. Martin author appeared in Vernaculars in an Age of World Literatures. Edited by Christina Kullberg and David Watson, professors at Uppsala University, Sweden, the book of critical essays was published by Bloomsbury Academic.
The “global context” analysis of chapter four by Dr. Kullberg compares Sekou’s “catastrophe literature” with that of his contemporaries, Richard Georges (Virgin Islands) and Celia Sorhaindo (Dominica).
January also saw the publication of Disaster Matters: Disasters Matter. The experiences with Caribbean hurricanes, earthquakes, and volcanoes fill the literary textbook with the works of 52 major authors and upcoming writers from 19 countries and territories, from Cuba to Martinique to Trinidad.
Sekou’s poems are in the new title, released here by House of Nehesi Publishers (HNP) — so are writings by St. Martin’s Fabian Badejo, Tamara Groeneveldt, Faizah Tabasamu, and Greta Rodney.
“The anthology is edited by Yvonne Weekes from The University of the West Indies, Barbados, and Wendy McMahon, University of East Anglia, UK. The 213-page book includes science articles by Prof. Jenni Barclay, disaster photos, and study activities,” said Jacqueline Sample, HNP president.
“Lasana starts with St. Martin as the center and that shows me the value he places on the island and all its people, a value that doesn’t wait to be validated outside,” said Dr. Rhoda Arrindell, assistant professor of Rhetoric and Composition, University of the Bahamas.
“Your people will validate your work like George Lamming has pointed out when they see that the work is about them in all their complexities. The fact that others see this value, this originality, and increasingly so for Lasana Sekou, it is a bonus point,” said Arrindell.
Voices: Monologues & Dramatic Text for Caribbean Actors is another early 2022 book. Edited by theater arts educator Yvonne Weekes, the anthology contains the monologues “Great Grandmother ‘T’” and “Goin’ School” by Sekou. On April 1, Voices was launched at the Walcott Warner Theatre in Barbados.
“Voices is a high school-accessible text for CXC, CSEC, and CAPE. It is the region’s newest book for theater teachers and students, aspiring actors; auditions; and stage and short film directors,” said Sample.
On April 23, “People,” from Sekou’s Born Here (1986), appeared in Album van de Caraïbische Poëzie / Album of Caribbean Poetry, edited by Michiel van Kempen and Bert Paasman. The launch of the bilingual book was streamed live from the Netherlands where it was published by Rubinstein Publishing.
The poems of St. Martin’s Drisana Deborah Jack, Wycliffe Smith, and of leading and little-known voices from Aruba, Bonaire, Curaçao, Saba, St. Eustatius, and Suriname, are in the 288-page collection.
On April 28, the University of the West Indies Press launched 100+ Voices for Miss Lou: Poetry, Tributes, Interviews, Essays, edited by award-winning writer Dr. Opal Palmer Adisa.
“Lasana Sekou’s tribute to the grande dame of Jamaica’s spoken word was selected for 100+ Voices for Miss Lou from his trilingual volume Nativity,” said Sample.
The 476-page anthology out of Jamaica includes writings by Carolyn Cooper, Mutabaruka, Percival J. Patterson, Velma Pollard, Easton Lee, Linton Kwesi Johnson, Kwame Dawes, Vivian Lewis, Ajamu Nangwaya, Paul Keens-Douglas, Mervyn Morris, Kei Miller, and Ann-Margaret Lim, said Sample.
“It keeps us on our toes to see Lasana Sekou published by various publishers; to see scholars engage his St. Martin-Caribbean writings. I want readers everywhere to share in these developments,” said Sample. HNP published Sekou’s second book, For the Mighty Gods, in 1982, and most of his titles since then.