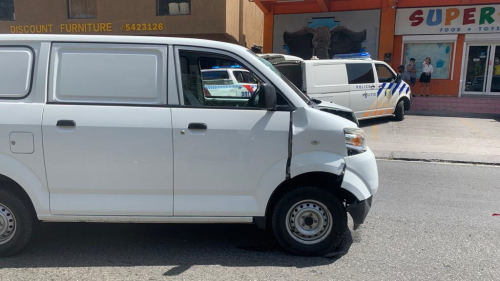 PHILIPSBURG:--- A driver of a white caravan, who appeared to have not been wearing his seatbelt, is nursing a bruised head after he bashed into his windscreen following a three-vehicle accident he appears to have caused around 10:00 am on Sunday, May 22 Bush Road.

He received first aid from ambulance personnel at the scene.

The preliminary investigation revealed that the white caravan was moving at such a speed that he lost control; crashing into the rear of a gray i10. That impact caused the i10 to shoot forward and slam into a gray SUV, which made a left turn.

This investigation is still ongoing.