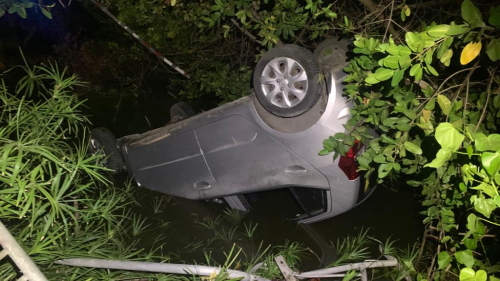 PHILIPSBURG:--- A driver of a silver Hyundai i10 is nursing some minor injuries as a result of crashing into the Fresh Pond in the vicinity of Prins Bernhard Bridge on Sunday evening.

Police Central Dispatch received several calls about the accident that occurred around 10:30 pm. At the scene, police patrols found the car in the pond, but the driver was already out of the pond. He told police he had lost control of the vehicle while driving towards the stoplights and ended up in the pond.

The vehicle has been towed out of the pond and removed from the scene.
This investigation is ongoing.