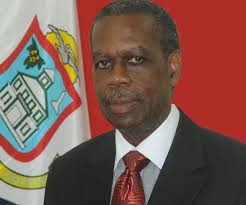 PHILIPSBURG:--- Acting Governor of St. Maarten Reynold Groenveldt has passed away today.
SMN News learned that the acting governor died suddenly. SMN News understands that Acting Governor Reynold Groenveldt passed away today at the St. Maarten Medical Center (SMMC) after suffering a massive heart attack. The information on the passing of the acting governor has been confirmed by Governor Eugene Holiday.
Attorney at law, Mr. Reynold Amando Groeneveldt was appointed by Royal Decree, as the first Acting Governor of Sint Maarten. Previously Mr. Groeneveldt served as Acting Lieutenant Governor during the transition period from May 31st, 2010 until October 10th, 2010.
Mr. Reynold Groeneveldt was born on Aruba from Sint Maarten parents and grew up on Sint Maarten. After completing the John Philips School for Secondary Education he left for the Netherlands to pursue teacher training at the Pedagogical Academy in Rotterdam.
Upon the completion of this study, he returned to Sint Maarten and worked for a short period of time as a teacher at the Oranje School in Philipsburg. Subsequently, he was transferred to the Insular Department of Education where he worked for many years and later became the Director until 1995. In 1990 he obtained his Degree in Antillean law from the University of the Netherlands Antilles.
Since 1995 he has been practicing law on Sint Maarten Saba and St Eustatius. Mr. Groeneveldt works as an attorney at law. In the year 2001, he established his own law firm. Mr. Groeneveldt is married to Mrs. Glenda Patricia Groeneveldt-Smith and is the father of a daughter by the name of Angela Fleming-Groeneveldt.
Mr. Groeneveldt enjoys researching legal topics and acquiring legal knowledge, in particular in the areas of Constitutional and Administrative law. Mr. Groeneveldt was a member for many years of various committees that advised the Government on the process of Constitutional change.
The function of Acting Governor entails assuming the function of Governor whenever the Governor is not able to execute the function or whenever the Governor is not in the Country.