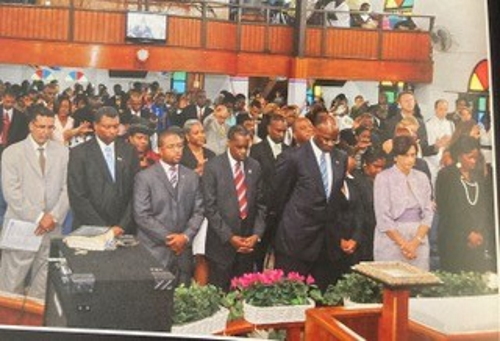 PHILIPSBURG:--- PPA leader Gracita Arrindell said in a press release that on “Monday, June 6th we bid farewell to a son of the soil, Reynold A. Groeneveldt affectionately known as ‘Groen’. Grateful to celebrate his public life and outstanding service to the country as an attorney at law, first acting Governor, and an experienced constitutional expert”. We express our heartfelt sympathy to his wife Mrs. Glenda Groeneveldt- Smith, his beloved daughter Angela, families, colleagues, and friends.”

Arrindell states; “ Mr. Groeneveldt was and will forever occupy a critically important part of our constitutional historical journey. Our quest to attain a new constitutional status within the Kingdom of the Netherlands is recorded in bits and pieces. ‘Reynold played an important role in this process for decades until his recent sudden passing. Called upon by civic organizations to render his expert advice on new constitutional developments, he heeded the requests and complied to the end”.

“Sint Maarten held its second referendum on June 23rd, 2000 chaired by Mr. Richards Gibson while Mr. Groeneveldt served as the Vice- Chairman of this important plebiscite. This public consultation started the process on the long road of discussions and negotiations for Sint Maarten to become a country within the Kingdom of the Netherlands wherein Mr. Reynold Groeneveldt executed his duties and responsibilities in various advisory roles and workgroups pertaining to our constitutional process”.

“As a former colleague civil servant and advisor constitutional affairs, I am privileged and great-full to have personally witnessed his commitment and contributions in these matters.
These areas included however are not limited to Mr. Groeneveldt being a member/ advisor of -the workgroup that prepared the Constitution of Sint Maarten as well as to the sub-group government organization. His overall involvement in numerous position papers, and interviews in reference to the new constitutional order remains relevant”.

Gracita says: There’s never a ‘good time to bid farewell to a former colleague and trusted administrator. Soft-spoken, even in expressed indignation over a controversial or disputed issue. Always neatly dressed in his favorite colors and always-polished shoes. ‘Groen’ believed in –and- personified the meaning of ‘integrity in the execution of one civic duties’

Arrindell concludes: “ we will sorely miss his presence, he advises, his camaraderie shared with many who appreciated his contributions to family, friends, colleagues, to Country. Leaving a void in the flesh should inspire those of us whom he has left behind to continue working with integrity, humbly, and intelligently for the greater good. His mission was accomplished on earth, continuing his journey in the Spirit. May his soul rest in eternal peace. Farewell ‘Groen’.