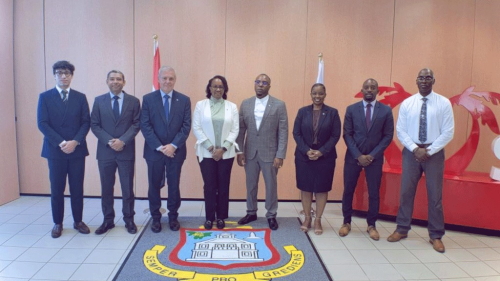 PHILIPSBURG:--- On Monday, May 30th, a United Nations Office for Project Services (UNOPS) delegation consisting of the Director of the UNOPS Multi-Country Office for Costa Rica, Panama, and the Dutch and English-speaking Caribbean countries, the Head of Programs, and the Principal Technical Advisor for Infrastructure and Project management met with the Council of Ministers (CoM) for the kick-off to the first official work visit by UNOPS to Sint Maarten for the prison’s new construction project.

On behalf of the Government of Sint Maarten, UNOPS received a warm welcome from Prime Minister Silveria E. Jacobs, Minister of Justice Anna E. Richardson, Minister of VROMI Egbert J. Doran, and Minister of Finance Ardwell M.R. Irion. During the meeting, Prime Minister Jacobs expressed her delight with the arrival of the delegation to Sint Maarten. Minister Richardson shared the Prime Minister’s sentiments and expressed her gratitude to UNOPS and the Dutch Ministry of Interior and Kingdom Relations (BZK) for the work visit finally materializing, as it had been part of the technical discussions for quite some time. During the meeting, a presentation was given by UNOPS Director Mr. Alejandro Rossi, introducing the organization and sharing the objectives and goals of the work visit.

The main purpose of the work visit was geared toward UNOPS familiarizing itself with Sint Maarten and the various stakeholders in the justice chain that will be involved in the project. In addition, the aim was also to further the discussions on the finalization of the Project Agreement to start phase one of the project which focuses on planning, design, and procurement activities for the new prison.

The discussions with UNOPS concerning the prison have predominantly been held on a technical level by representatives of the Ministry of Justice Sint Maarten and BZK, who together with UNOPS representatives, have formed a working group for the new prison project. During the work visit, several working sessions were held to work out further details relating to the project proposal of UNOPS.

Following the kick-off meeting with the CoM, an introductory meeting was held with the prison management team, headed by the Prison Director Mr. Steven Carty. He discussed the current challenges experienced in the prison and the improvements being made to address these challenges. An extensive tour was also provided at the Point Blanche Prison and House of Detention where UNOPS received a good first impression of the facility. Thereafter, the working group also toured the Immigration holding cells and KPSM holding cells.

During the work visit, courtesy visits were paid to the National Recovery Program Bureau (NRPB) and the Sint Maarten Medical Center for informative discussions as both organizations have experience with current infrastructural projects. The organizations were able to share their knowledge and best practices in the areas of procurement, project management, building material, the labor market, and more.

To get a better insight into the crime trends in Sint Maarten, a meeting was held with the Public Prosecutor’s Office. This discussion provided UNOPS with a deeper understanding of the types of crimes committed in Sint Maarten, which is relevant information when discussing the scope of the prison project. The Mental Health Foundation and Turning Point were also visited to discuss the psychological and psychiatric care for prisoners during incarceration. A meeting was also held with the Department of Foreign Affairs (DBB).

On the last day of the work visit, the delegation paid a courtesy visit to His Excellency, Governor Eugene B. Holiday and Parliament’s Justice Committee received a presentation on UNOPS as well as a recap of the week’s visit along with the first impressions formed by UNOPS based on the discussions held throughout the week.

Minister Richardson stated, “Much progress has been made in defining the project proposal to secure and sign the project agreement. As such, I am delighted to know that the representatives of UNOPS and BZK got to meet with critical stakeholders in a bid to understand the realities being faced here on Sint Maarten before the first phase of the project.”

The working visit was officially closed off with a meeting with the CoM where UNOPS advised that it hopes that in the coming months all parties will be able to successfully take the final steps towards signing the project agreement to officially start the new prison project.

Having taken note of articles published in the local media since the conclusion of the UNOPS work visit, where reference is made to the 43rd report published by the Sint Maarten Progress Committee in February 2022, Minister Richardson finds the contents being highlighted, counterproductive to the fruitful work visit that took place and the support rendered by UNOPS and BZK to the Ministry.

“To my understanding, the Progress Committee was fully aware that the Ministry of Justice would be welcoming the delegation of UNOPS to Sint Maarten for the first official working visit during the past week, as such, the timing of these publications with dated information is highly questionable and quite unfortunate. In fact, the 43rd report of the Progress Committee was published all the way back in February of this year. Since then, essential steps have been taken toward finalizing an agreement with UNOPS. Regardless of the attention being placed on this report, the Ministry of Justice remains committed to working with UNOPS and BZK to realize the finalization of an agreement to start phase one of the new prison project,” concluded Minister Richardson.