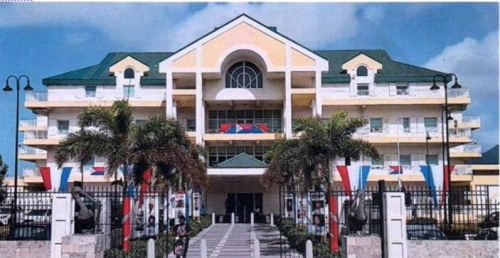 The people and the Government of Sint Maarten will be commemorating the 37th Anniversary of “Flag Day”, on June 13th, 2022. The annual commemoration of “Sint Maarten Flag Day” will take place from 8:00 am to 11:00 am, on the premises of the Government Administration Building in Philipsburg.

The main feature of this year’s activities will be a Patriotic School Parade which will be led by the three primary schools in Philipsburg namely, Sister Borgia, St Joseph, and Oranje School. Some of the main highlights of this event include the raising of the Sint Maarten Flag along with official addresses by the Honorable Prime Minister Silveria Jacobs and The Honorable Minister of Education Culture Youth and Sport drs. Rodolphe Samuel along with special cultural performances by King Bobo, Ilismo, Melissa Fleming, and DJ Pauly.

It has been 37 years since the Sint Maarten flag was presented by Dr. Claude Wathey, approved and established by the then sitting members of Island Council on June 13th 1985., Today, the Sint Maarten Flag that was designed by Roselle Richardson remains an intricate part of the fabric of our Historical-Cultural Heritage and the cornerstone of our Patriotism.

In the days, leading up to the commemoration ceremony on June 13th, Minister of Education Culture Youth & Sport drs. Rodolphe Samuel is calling on persons and businesses in the community to show their pride and patriotism by flying the Sint Maarten flag on their vehicles and buildings or wherever they deem it appropriate. The Government of Sint Maarten will do its part also as the Government Administration Building has been decorated reflecting the flag colors red white and blue. Persons are also reminded to follow proper protocol and etiquette of how the flag should be displayed