~ Former MP Frans Richardson was condemned to 20 months with a 5-year ban on passive rights. ~ 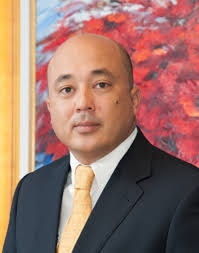 PHILIPSBURG:--- Former Chief Executive Officer of Ports St. Maarten Mark Mingo was fully acquitted by the Court of Appeals on Tuesday.
Mingo’s life was turned upside down when he was arrested on June 17th, 2017. On Tuesday the former CEO broke down when the verdict was read in open court and he was able to walk out a free man.
The court determined that the prosecution did not have the evidence to support their claim that Mingo overrated over 200 invoices.
Chief Executive Officer Mark Mingo was found guilty in January 2020 by the Court of First Instance he was found guilty of forgery and scamming the Port of St. Maarten in excess of $10M. Mingo was sentenced to 36 months imprisonment while not allowed to work for any government-owned company for a period of six years. On Tuesday, he was declared an innocent man since the Prosecution was not able to prove their charges against him.
The Prosecutors claim that some companies sent fictitious or greatly increased bills to the port that were paid.
The appeals court found that the prosecution did not prove their case against Mingo. In 2017 the Prosecution said Mingo defrauded the port of at least 17 million dollars. In 2020 he was convicted of defrauding the port of over $10M.
Co- suspects in the Emerald case were former Member of Parliament Frans Richardson who received 20 months imprisonment and a 5-year ban on his passive rights. Member of Parliament Frans Richardson was sentenced to 36 months imprisonment while he lost his voting rights for a period of five years. The court found that Richardson accepted $370,000.00 in bribes from the dredging project conducted by Devcon.
While businessman Oniel Arrindell was found guilty of bribing MP Richardson, tax fraud, and firearm possession. He was sentenced to 66 months imprisonment by the court of the first instance in 2020/ The appeals court reduced his sentence to some 40 months.

The appeal in large-scale TBO investigation Emerald: convictions and acquittal

The Common Court of Justice today sentenced A., the main suspect in the Emerald investigation, to a prison sentence of forty months. Another suspect, a former member of parliament R. has been sentenced to twenty months in prison. The suspectM., CEO of the Port at the time, was acquitted of all the accusations made against him.

The Court has found that A. was guilty of defrauding the Port, bribing then a member of parliament R., possessing a firearm and ammunition, and committing tax fraud. A. was acquitted of the accusation that he had defrauded the Port by submitting false invoices to the Port.
A., who acted as a PR employee of the Port and at the same time as a consultant to an American company where the Port had concluded a dredging contract, defrauded the Port by an amount of USD 2.7 million that this dredging company paid to him as a consultant under false pretenses by charging to the Port. In addition, A. bribed a member of parliament R. by paying him a sum of USD 370,000 in exchange for support from R. to the dredging contract to be concluded between the Port and the American company.
As a member of parliament, R. allowed himself to be bribed by A. for the aforementioned amount of USD 370,000,-, laundered this money, and also committed tax fraud. In addition to the prison sentence of twenty months, the Court imposed on Mr. R. as an additional punishment that he may not be elected as a member of general representative bodies for a period of five years.

M., who was ultimately responsible for the Port at the time, was acquitted of defrauding the Port. It is true that the Court's investigation has shown that his actions as CEO of the Port can be questioned, but in the court's opinion, no legal and convincing evidence has been provided for his involvement in the port fraud.
The defendants and the public prosecutor have 14 days to lodge an appeal in cassation with the Hoge Raad in the Netherlands.