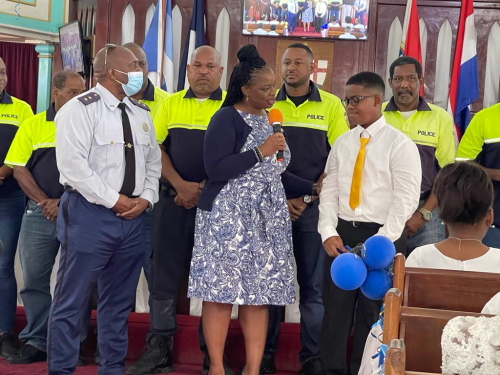 Minister Richardson stated, “Officer Benjamin’s untimely departure six years ago, rocked the entire nation of St. Maarten and to this day his memory lives on in KPSM and in our hearts. It gives me great joy to see Keenan carrying on his father’s legacy on admirable levels. Today he was honoured as the most outstanding student among his peers receiving an award for the Best Student of Group 8B of the Rev. John A. Gumbs Campus. Keenan also received awards for the subjects of Dutch, General Science, Moral Education, Social Studies, and Music."

The graduation was aptly themed “Fearless in Times of Adversity.” Powerful words with exemplary examples as to how the students have all faced adversity and overcame them were shared. Today’s graduation ceremony commemorates the students’ fearless approach to all things and is today triumphant.

“On behalf of the Ministry of Justice, I take this time to congratulate Keenan Benjamin, the graduating Class of 2022, and their families. I wish you all much success in high school as you continue to be a great example for your schoolmates and friends,” stated Minister Richardson.

The Ministry of Justice hereby thanks the management and staff of MAC for allowing the Minister of Justice and KPSM to have that special moment with Keenan Benjamin on behalf of the Police Force of St. Maarten in memory of his dad.