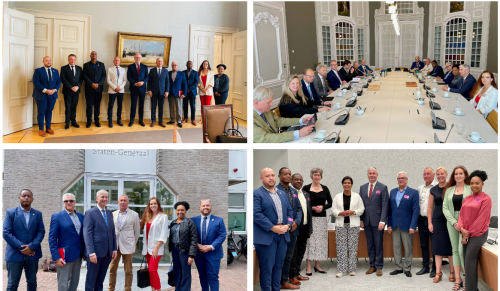 THE HAGUE/SABA:--- The Saba Island Council is currently in the Netherlands for a series of meetings, work visits, and the year congress of the Association of Dutch Municipalities VNG. Commissioner of Social Affairs, Public Health, and Housing Rolando Wilson is also in the Netherlands and joins part of the program of the Island Council, in addition to his own program.
The Island Council delegation, consisting of Chairman and Island Governor Jonathan Johnson, Island Council Members Carl Buncamper, Vito Charles, Eviton Heyliger, Esmeralda Johnson, Hemmie van Xanten and Island Registrar Akilah Levenstone, started its working visit on Monday, June 20 and returns to Saba on Sunday, July 3.
The program includes meetings with the Permanent Committees for Kingdom Relations of the First and Second Chamber of the Dutch Parliament, State Secretary of Public Health, Wellbeing and Sport Maarten van Ooijen, and Vice-President of the Council of State Thom de Graaf.
The main topics that were discussed with the First Chamber (on Tuesday, June 21) and the Second Chamber (on Thursday, June 23) included: healthcare, connectivity, cost of living, the notary and banking issue, the number of seats in the Island Council, the Kadaster and the modernization of the Opium Law.
A number of work visits take place to various entities and organizations, such as the Weener XL Social Workplace in Den Bosch, the National Institute for Family Finance Information Nibud in Utrecht, Bazalt Housing in Zaltbommel, “Gezond en Gelukkig” (Happy and Healthy) organization The Hague, the Authority Consumer and Market ACM in The Hague, and the National Coordinator for Discrimination and Racism in The Hague.
The delegation will take part in the VNG year congress in Hoorn on Tuesday, June 28, and Wednesday, June 29. On Friday, July 1, the delegation will attend the annual commemoration of the abolition of slavery Keti Koti (Break the chains) in Amsterdam. On Monday, June 27, the delegation has been invited to be present at the round table discussion about the Dutch slavery past in the Second Chamber where Island Council Member Vito Charles will be one of the guest speakers. The delegation had dinner with Member of the Second Chamber Jorien Wuite of the D66 party on Monday, June 20.