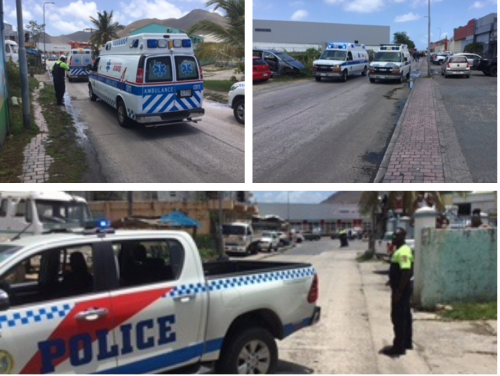 PHILIPSBURG:--- The Forensics Department, along with National Detective personnel, are investigating an incident that occurred this morning, June 28, 2022, at approximately 11:00 a.m. on Cay-Bay road, during which a dangerous suspect was apprehended.
The suspect, against whom an extradition warrant has been issued in connection with the commission of multiple armed robberies, also attempted to evade arrest
In his attempt to flee, the suspect rammed two police vehicles, as a result of the suspect's actions, the police were forced to fire several shots at the suspect. The suspect suffered a gunshot wound and was subsequently apprehended by the police.
After his arrest, ambulance staff administered first aid to the suspect, who was later transported to St. Maarten Medical Center. The investigation is ongoing.