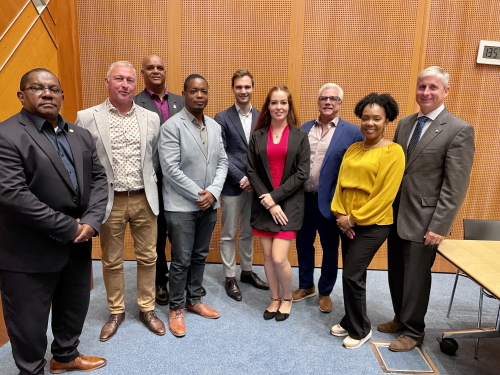 THE HAGUE/SABA:--- A delegation of the Saba Island Council and Commissioner of Public Health Rolando Wilson met with Dutch State Secretary of Public Health, Wellbeing, and Sport Maarten van Ooijen in The Hague on Thursday, June 30.

The meeting focused on the challenges that Saba as a small island faces in providing its residents the healthcare that is needed. Aside from the State Secretary and an advisor, officials of the Care and Youth Caribbean Netherlands (ZJCN) Department in Bonaire attended the meeting with the Saba delegation in a virtual manner.

Island Council Member Vito Charles said it was an informative meeting where the Island Council and Commissioner Wilson were able to bring forward a number of healthcare issues and talk about the importance of the wellbeing of the Saba people.

Island Council Member Carl Buncamper said it was “good to hear” from the State Secretary that there are ambitions to solve Saba’s issues in healthcare. “The ambition is to do better by the people on the Caribbean Netherlands islands.” Buncamper said it was important to address this, also considering the “erosion of trust” with the healthcare provider and insurer.

The Island Council Members have noted with content that a pilot will soon start whereby the medical referral process of Saba patients to St. Maarten should become less cumbersome and bureaucratic. The Island Council conveyed to the State Secretary that it wants to see this pilot implemented as soon as possible.

“I am looking forward to the pilot with referrals and also to solutions for the small plane that is now used to transport our patients,” said Councilman Heyliger. He pointed out that the small plane was not comfortable for especially senior patients and patients with physical impairments.

The mode of transport was brought up in the meeting with State Secretary Van Ooijen. In Heyliger’s opinion, Winair should be used to transport the Saba patients, because the aircrafts are more suitable. Besides, it made more sense because the Dutch government owned shares in the airline.

Councilman Charles said a key matter for the Island Council was that the medical care in St. Maarten catered to the needs of the Saba people. “Care should be provided close to home in a respectful and dignified way. We emphasized that in the meeting, as we have done many times before,” said Charles.

Councilwoman Johnson said that aside from the curative care, the Island Council also pointed out that it was important to invest in preventive care. “During the COVID-19 pandemic, we realized that we have many restrictions in healthcare on Saba, and that people’s health and the prevention of sickness is key,” she said. During Thursday’s meeting she and Charles mentioned the need for recreational facilities on Saba, while Buncamper said Saba was lacking a public swimming pool.

Councilman Hemmie van Xanten said he was not entirely satisfied with the meeting with Van Ooijen. “Though we were able to express our concerns about healthcare, I have a feeling that there is insufficient understanding for the things that are not going as they should and the role of the ZVK office plays in that.”

Van Xanten said he told the State Secretary that because of various incidents, the Saba people had little confidence in the service delivered by the ZVK office in Bonaire. He said the State Secretary and the ZJCN officials took note of this complaints and promised to work on restoring that trust through, among other things, an independent complaints bureau and better communication.

Van Xanten said that at these types of meetings, which in his opinion were of a more general nature, there was not enough opportunity to go into details. He said that he would like to have one-on-one meetings with for example a ZVK office in Bonaire to tell them in details what the problems with providing proper care for Saba patients.

According to Commissioner Wilson, quality, procedures, communication and logistics in medical referrals were all re-emphasized. “The discussion and the points that we had previously were once again made very clear. We want the best healthcare system for our people, and nothing less,” he stated. He said that the points brought forward during Thursday’s meeting will be looked into. Every two months ZVK and ZJCN will meet with the Executive Council. New policies and procedures will have to be discussed first with all stakeholders before they are implemented.