EDITOR’S NOTE: Acclaimed author, and political thinker George Lamming, OCC, CHB, was born on June 8, 1927 and died on June 4, 2022, in his native Barbados. He was 94. Dr. Lamming was accorded a state funeral. On July 1, a solemn “Memorial Service” held for him at the Frank Collymore Hall, was attended by his family, President Dame Sandra Mason and Prime Minister Mia Amor Mottley, along with other dignitaries, colleagues, and friends from the country and abroad. The following tribute was written by Lasana M. Sekou, founder of House of Nehesi Publishers, George Lamming’s first Caribbean publisher. 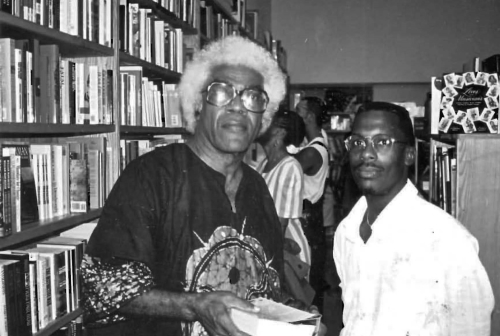 When we lose one of our greatest writers, we are thrown into mourning but when a publisher loses an author of the renown and caliber of George Lamming, the mourning becomes much more than an expression of collective loss and turns into a very personal and disruptive bereavement. That was the special relationship House of Nehesi Publishers (HNP) had with George Lamming because though it was a dream come true for us to have published him, he chose us. It was in 1993, at the Caribbean Writers Summer Institute, hosted by the University of Miami where he taught the fiction workshop in which I was a James Mitchener Fellow. At the first “office meeting,” thinking I was called to discuss my writing, Dr. Lamming handed me his manuscript for HNP to consider publishing. We remain ever thankful and became in a very vital sense part of his coming home.
The manuscript became Dr. Lamming’s first HNP title, Coming, Coming Home: Conversations II – Western Education and the Caribbean Intellectual, and his first book published in the Caribbean. The seminal collection of essays, which includes a French translation of the original English text, was launched at CARIFESTA VI in Port of Spain in 1995. Coming, Coming Home received a rush of reviews in Trinidad and Tobago, Barbados, St. Martin, and throughout the region. Dr. Lamming told us a few weeks later that Coming, Coming Home was his first book to be so widely reported on by especially newspapers in the Caribbean. The book has since been reprinted and includes a Spanish translation, and was at one time a CXC social studies text for teachers.
Sovereignty of the Imagination: Conversations III – Language and the Politics of Ethnicity by George Lamming was published in St. Martin in 2009, again by the indie press HNP. The reviews, by noted journalist Rickey Singh and others, spread throughout the region in major newspapers. The last time I visited Dr. Lamming in Barbados was in 2019. He wanted to know about our progress on the new edition of his first Conversations volume, which was published in London in 1992. Dr. Lamming had approached us some years earlier about republishing the first Conversations. He wanted the three volumes published in the Caribbean. We also spoke about publishing one of his novels. He appeared somewhat surprised that HNP was serious about the matter when pressed about which one of his novels might sell better for the investment that a small press would have to put in the project: “Oh, Sekou, I don’t know which one,” said Dr. Lamming in that gravel-rich voice. Mr. Singh visited him about an hour after I had arrived and with his somewhat shy smile, he and his daughter got caught up in the light banter about “which one.” I would like to think that HNP is to date the Caribbean publisher of George Lamming, an aspect of his legacy that belongs to all of us. We would wish to continue this relationship with his estate.
George Lamming loved his Bajan people dearly. His love for Haiti and Cuba and his solidarity with the peoples of both historically revolutionary nations, their ongoing battles against the collective enterprise of empire, were clear, constructively critical, and unwavering. He was fascinated by St. Martin’s plurilingual reality, the way how its people traveled widely; and was utterly charmed by the young people of the organizing committee of the St. Martin Book Fair on the three occasions that he was a guest author of the literary festival. Dr. Lamming dearly loved his Caribbean people, across race and language zones, and embraced fully the peoples of the Caribbean diasporas that tenant what I call “George Lamming’ external frontiers.” He once told me that “being a Caribbean man made him more of a Barbadian than being a Barbadian made him more of a Caribbean man.” George Lamming, internationally acclaimed novelist, essayist, political thinker, poet, chose to be a Caribbean man, an outstanding Bajan man. His was a “spirit of generosity,” according to historian Richard Drayton, and he had long cast his lot with the masses of the people. In each country and in the yet non-independent territories of this archipelago and its region, it could be said, resolutely, that the George Lamming of nuestro caribe, him belong to we, to I and I, as we would say in St. Martin, he’z we’z own.
Farewell, Master Teacher.