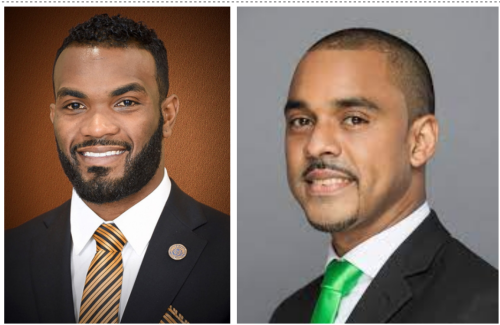 PHILIPSBURG:--- Members of the Party for Progress were left with their mouths hanging on Wednesday when they tried to dupe parliament into adding an agenda point to the urgent meeting of parliament called to debate the constitution of St. Maarten in order to bring back suspended Member of Parliament Claudius Buncamper.
PFP MP Raeyhon Peterson asked that the chair of parliament add an agenda point to the meeting on Wednesday on the confidence of parliament in the Minister of VROMI Egbert Jurendy Doran.
The urgent meeting of Parliament was called during the recess which commenced with 9 members present, including MP Rolando Brison and MP Hyacinth Richardson.

When the PFP requested the agenda point be added which the chair of parliament obviously agreed with, MP Brison in a point of order pointed out the shenanigans that are being played in parliament by some politicians, he then notified the chair that she could only continue with such a meeting when the parliament has more than half of its members present. MP Rolando Brison and Hyacinth Richardson then walked out of the meeting leaving them without a quorum to continue.
Certainly, the Minister of VROMI was once again saved by at least two members of the coalition namely Brison and Richardson. It is clear that the feud between the chairlady of parliament and MP Rolando Brison has boiled over and now politics are being played at the expense of the people. The chairlady of parliament clearly left the coalition government with the way she has been handling the affairs of parliament in order to accommodate members of parliament in the opposition benches.

In the Council of Minister's press briefing on Wednesday, SMN News asked the Minister to give his thoughts about the motion that was promised two weeks ago. Doran said that he does not believe the motions have anything to do with the reports of the Ombudsman but instead it’s a personal on various points, he promised to enlighten the public sometime in the future on where he believes the current development derives from.
He made clear as a minister he has a job to do, and some drastic changes are being made in the Ministry of VROMI with respect to lower costs for the government when awarding contracts. The Minister said the government saved NAF 130,000.00 monthly on the wastewater treatment plant alone which he believes upsets some people. He did promise to execute his duties and return to parliament with the answers to the questions when the meeting resumes.