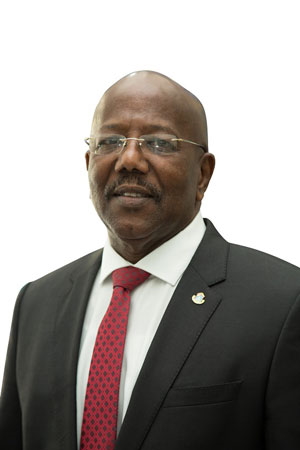 PHILIPSBURG:--- Member of Parliament William Marlin who is currently in Panama on medical in an interview with Andrew Dick said that he went to Panama some five months ago to seek medical treatment and was expected to return after three weeks. However, after a surgery there he was infected while in the hospital, thus he remained in the hospital on intravenous antibiotics.
Marlin said that he is not yet out of the “woods” relating to his medical condition however, he is hoping that he will soon get better and be able to return home.
In commenting on the issues taking place here at home, Marlin said that people are not listening to what is said in radio interviews. He said that just recently he received a number of phone calls relating to statements that were made by suspended Member of Parliament Claudius Buncamper. He said when he listened the comments that the suspended MP made are not what he was told by other persons that called him.
In the case of the Minister of VROMI Egbert Jurendy Doran and the members of the Party for Progress (PFP) Marlin said the two members of parliaments namely Melissa Gumbs and Raeyhon Peterson went to the minister’s office to intentionally record the minister, and this is an outright shame.
Marlin said the same is the case with the partial recording that was released by the PFP. He said he even read in the daily newspaper that stated that the Minister threatened the member of parliament which is not the case.
Marlin said that what he has not heard from the people or the news medium is the premediating taping of the Minister. He said he felt that the Integrity Chamber should be called in on the matter while parliament needs to call a meeting on their way forward now that it is public knowledge that the PFP secretly tapes meetings. He questioned how many closed-door meetings of parliament were taped and will be used during an election campaign and how safe is this for the country and its national security.
Regarding the Ombudsman report which is an island-wide topic, he is of the opinion that the ombudsman should be called into a VROMI committee meeting or central committee meeting and question her on the report because there is information that he has that is not part of the report.
One example he gave is the reason the two committee members resigned; Marlin said the Members of Parliament that called the meeting did not ask the minister any questions about the report of the ombudsman even though she used the word “allegedly” in several instances.
Marlin said that MP Raeyhon Peterson is saying he is not against the minister and does not want to get rid of the minister and that he is only doing his job. Yet the member of parliament did not question the minister on the report. Marlin also questioned the report prepared by the ombudsman because the information he has is not in the report. “In the report, the ombudsman used words like allegedly which means that she is not sure of the information she presented in the report. Because of these things Marlin said that he would have liked to pose questions to the ombudsman.”
Marlin also called on MP Raeyhon Peterson to produce the negative advice he wrote on granting Alegria water rights. He said only then everyone would see that he was against the granting of water rights to the developer.