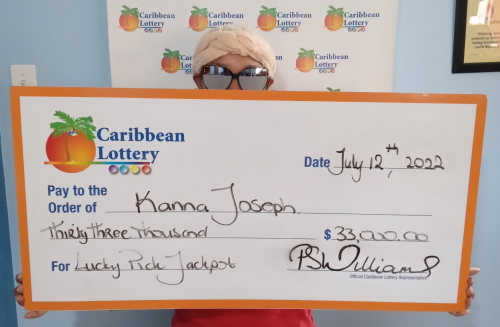 The two walked away with their huge wins of US$33,500 and US$33,000 respectively and have already made sound plans for their hefty haul.

Mr. G, who was playing Lucky Pick for the very first time, struck double streaks of gold when he became a two-time consecutive winner within two weeks of playing the game. After barely getting over the excitement of winning his first Lucky Pick Jackpot split of $20,750 from the allotted top prize of $41,500, he realized two weeks later that he had become St. Maarten’s seventh Lucky Pick jackpot winner for 2022 to claim the US$33,500 top prize.

While purchasing some seeds for his mother, Mr. G contemplated purchasing tickets for the night’s draw. The representative at Healthy Upkeep 2, where he eventually purchased his ticket reminded him that he needed to be in the game for a chance to win. He then used a $20 tip he got earlier from a customer to purchase his ticket.

“What a joyous feeling!” Mr. G exclaimed, also adding that he felt, happy, nervous and excited all over again since his split win.

Mr. G has decided to bank his winnings until further notice and encourages players to continue playing.

“I am living proof,” said the overjoyed winner. “If you’re not in it, you cannot win it!”

Ms. Joseph, who, on the other hand, is an avid daily player of the Caribbean Lottery Lucky Pick game, was overjoyed when she found out that she was St. Maarten’s latest and eighth Jackpot winner for this year.

Ms. Joseph, who enjoys playing the Caribbean Lottery games given the ease of winning, would purchase her numbers daily at the Peli Deli Retail agent. After almost winning the jackpot a week prior to her huge hit of US$33,000 she became more persistent and dedicated to the Lucky Pick game as she felt that her time was coming.

“I would have been satisfied winning a Pick 4 first prize game,” said Ms. Joseph. She continued, “Imagine the joy felt when I found out that I was the lucky winner of US$33,000!”

Ms. Joseph is thankful and happy for her Lucky Pick victory as she noted that it will allow her to become financially stable and give her the ability to fund her son’s education.

Paula Williams, Site Manager for the Caribbean Lottery in St. Maarten, expressed her pleasure at the series of wins.

“The Caribbean Lottery Team is happy to hand over these jackpot cheques to these two players,” she said. “It is so delightful to see our customers win and in such a short span of time – one after the other. We wish them all the very best with their winnings.”