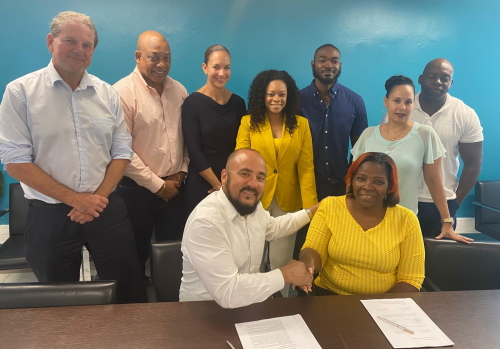 Simpson Bay:--- On August 3rd, 2022, the Princess Juliana International Airport Operating Company (PJIAE N.V.) and Windward Island Civil Servants Union (WICSU/PSU) reached an agreement on the application of Cost-of-Living Adjustment (COLA) percentages on salaries for the period 2018-2020 and the settlement payments due, based on the applied adjustments.

PJIAE N.V. and WICSU/PSU concluded a long and at times contentious negotiation process, with an agreement serving the interest of both the workers represented by WICSU/PSU and the organization. This lengthy process involved the hard and dedicated work of those who are deemed instrumental to this positive conclusion. The PJIAE N.V. Management and support team, in collaboration with the WISCU/PSU team, worked tirelessly for several months.

At the close of the negotiations, the President of WICSU/PSU, Ms. Sharon Cangieter extended words of appreciation to the PJIAE N.V. team, having faced difficult negotiations, for its changed approach and willingness to work towards a solution to a long overdue matter. Ms. Cangieter was quoted saying: “It is in the interest of the workers and the organization for continuous interaction with the union. It should not be that parties only interact when there are disputes.”

Chief Executive Officer of PJIAE N.V., Mr. Brian Mingo concurred with this sentiment and expressed the viewpoint of management with the words: “Our employees are our biggest asset and through the difficult times faced, they worked hard even when we were not able to compensate such hard work and dedication. The growth of the entire organization will go hand in hand with a brighter future foreseen.”

On behalf of the workers represented, PJIAE N.V. and WISCU/PSU, were elated to close this chapter and pledged to continue close and recurring communications in support of the rebuilding of – and the further development of the “Airport of the Future”.