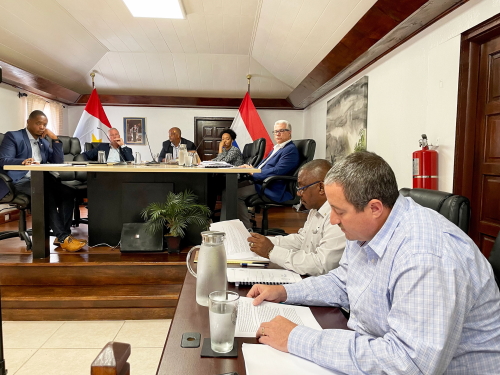 SABA:---The Island Council on Wednesday, August 10 unanimously adopted the year report for the budgetary year 2021. The financial statement for 2021 showed a positive balance of US $1.333.350.

Both in 2020 ($962,000) and 2021 ($1.333.350), the public entity had positive balances, but this was directly linked to the amounts that were received in incidental funding from the Dutch Government during the COVID-19 pandemic. In 2019, considered to be a normal year without abnormal influxes of incidental funding, the public entity closed with a considerable deficit.

“This not only shows how fragile our financial position has been for the past years, but it also proves that by working with a skeleton budget, it is rather difficult to remain within the budgetary boundaries even when a very conservative spending approach is taken. Had it not been for the additional incidental funds which are outlined in the reports, it can safely be assumed that 2021 would have ended with a negative balance,” said Zagers.

Zagers said that although the budgetary year ended with a positive balance, the budget in itself offered little flexibility and opportunity for the government to grow its operations or to facilitate improved services. He remarked that in order to balance the 2021 budget, the Public Entity needed special permission from the Ministry of Home Affairs and Kingdom relations BZK to release over $600,000 from the general reserve.

“Just as in previous years, in 2021 the Public Entity Saba operated with a skeleton budget, which was balanced on paper, but was far from realistic. Only because of non-structural funding and a very conservative spending policy was it possible to deliver many of the listed results,” said Zagers.

“Using incidental funding to finance structural tasks has become the norm for this administration. For 2021, the finance department managed 70 different incidental subsidies, many of which branched off into multiple projects. Had it not been for these incidental funds, the quality of government and its ability to function would be further severely hampered,” said Zagers.

A large number of projects from incidental funding, 70 in 2021, but as high as 86 in the past, puts a big strain on the public entity’s human resources. Zagers explained that during the meeting of the auditor with the Island and Executive Council earlier this week, the auditor pointed out that 15 incidental projects would be considered normal for a small-sized municipality in the Netherlands.

With the signing of the Saba Package 2.0 in June this year, the public entity will receive more than 4 million euros extra free allowance structurally from the Netherlands, an increase of almost 50% of the total free allowance that Saba has received annually since becoming part of the Netherlands.

According to Zagers, this increase is a direct result of Saba’s strong financial management and a testament to the good relations that have been established over the years resulting in trust between the local and the national government. “This also shows that with significant lobbying efforts from both the Executive and Island Council, the Saba agenda and it's most urgent needs remained relevant with the decision-makers,” he said.

However, it took very long for The Hague to agree to the increase of the free allowance. “If it had not been for the good relations built by this administration, a strongly consistent, and stable government, and the public entity’s ability to ensure that strong financial management remained a core governing principle even during the most difficult governing periods, this result could have been significantly lower and with many more restrictions,” said Zagers.

One significant development which was possible due to the increased free allowance is the subsidy that was provided to the Saba Electric Company (SEC) which ensures that electricity bills only increased by 10% rather than the anticipated almost 30%. Although energy prices remain high, without this subsidy the energy rates would have been significantly higher for the remainder of this year. This measure will provide some relief for the entire population during these very difficult times where the cost of living is extremely high, said Zagers.

Of the 2021 surplus, $600,000 was allocated to the buffer capital, bringing the amount of this reserve that can be converted to cash to cover any substantial unexpected expenditures to an amount of $2 million. Furthermore, $300,000 was allocated towards a reserve for general maintenance of government buildings, $300,000 towards creating a reserve for infrastructure projects to start tackling the substantial backlogs in maintenance on government properties, and the remaining $133,000 to the general reserve.