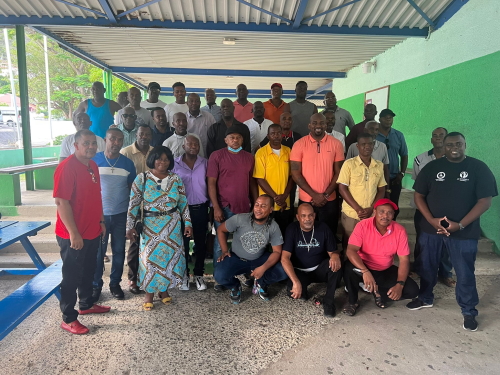 South Reward:--- The Haitian Association of St. Maarten (HASMA) lent its support to the bus drivers and their associations during their general meeting with Minister Ottley Sunday afternoon at Milton Peters College.

President of the United Bus Drivers association Mr. Claude Omeus along with his board presented a list of proposals that was submitted to the former Minister of TEATT Mr. Roger Lawrence for an amendment to the public transportation ordinance.

The participants discussed various issues and proposed changes within the industry including an increase in the bus fare, amendment of bus zoning route, cooperation between the dutch and french bus drivers association, medical coverage for bus operators, and updating the bus registry for border crossing.

Minister Ottley agreed to further investigate the issues presented and proposed an urgent meeting with the reps of the various bus associations later in the week.

HASMA was invited as an observer to the meeting as a way to familiarize and hear firsthand the ailments of the bus drivers. The public transportation sector is operated by approximately 85% of Haitian nationals/descendants, many of which must self-rely to solve issues like medical coverages, immigration, etc...

"We must be aligned on our approach towards the government, Far too long the bus network and the social issues of the bus driver here on the dutch side have been overlooked. Said one driver...

"HASMA stands in solidarity with the bus drivers, we are pleased to see they have chosen an organized manner to amass, document, and present their issues to the government of St. Maarten.

We look forward to the authorities taking a serious look at their concerns and their submitted proposals and finding common ground on a way forward on all points mentioned.

We do hope their issues are given the proper attention it deserves, after all, they are the public transportation industry of our country" - Fabio Doralice vice president of the Haitian Association of St. Maarten

"As the president of the united bus drivers association that has the majority of the bus drivers registered, it is my responsibility to see after my drivers. They are the ones on the road every day making sure public transportation continues to run in these hard times.

They too have issues, they too feel the pinch. We are calling on the relevant authorities to review our proposals and to hear our plea.

"We look forward to sitting with the minister on these and other issues" Claude Omeus said.

The United Bus Drivers Association informed Minister Ottley that while they know these concerns were prior to his tenure, they are extremely grateful that the Minister made his Sunday afternoon available to hear their grievances.

Minister Ottley expressed his gratitude to the association for inviting him and requested the opportunity to gather further information on the above mentioned concerns. A follow-up meeting is scheduled to be held on Wednesday, August 17th with the Minister, the United Bus Drivers Association, and his staff to further discuss pending matters and concerns.