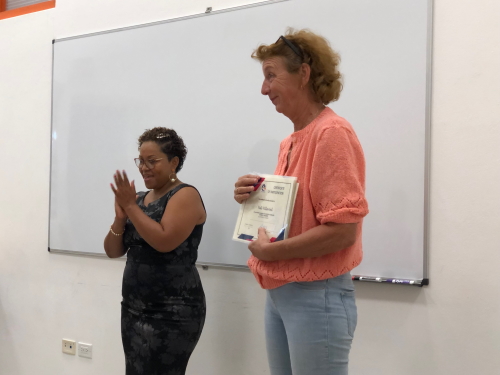 PHILIPSBURG:---  St Maarten’s own Foresee (4C) Foundation recently collaborated with the international refugee organization HIAS to provide basic English classes to a group of asylum seekers residing on the island. This was the first time both organizations worked together.
Foresee Foundation, also known as 4C Foundation, is a well-known local non-profit foundation (founded in 2013) that focuses on providing the skills needed to prepare St. Maarten children, youth, and the larger community for a globalized and highly connected world.

HIAS (Hebrew Immigrant Aid Society) was established in 1881 during the ethnic cleansing campaigns in Eastern Europe and Russia. The organization plays a vital role in assisting refugees and migrants in more than 17 countries throughout the world and has a large focus on the Caribbean. Their motto “ Welcome the stranger. Protect the refugee” adequately sums up what the organization is all about.

The two organizations collaborated to provide a 14-week basic English course (based on the Common European Framework) to a group of Venezuelan asylum seekers in St. Maarten. The course was funded by the United Nations High Commissioner for Refugees.

“I am so proud of this group of students because most of them spoke no English at all at the beginning of the course and are now able to have a basic conversation in English” said teacher Marisoli Flores.

The refugees mainly coming from Venezuela have established themselves on the island, most have full time jobs and are contributing to society and the local economy. One student summed up the impact the course has had on him as follows: “life is a bit easier now that I can communicate with colleagues and clients”.

The basic English course for the refugees was provided free of charge by HIAS in collaboration with Foresee Foundation with the assistance of Asha Stevens Hillside Christian School and NIPA. A follow up course (level A2) as well as a new group (level A1) is currently being planned by HIAS and local partners.