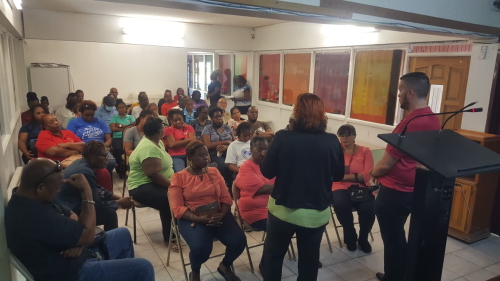 "The reality of their hardship caused by the non-payment of the vacation allowance was brought forward," Johnson said.

Present in the meeting were union colleagues of the WISCU/PSU, NAPB, SMCU, ABVO, and WIFOL in solidarity.

Johnson before delving into the outcomes of the general membership meeting referenced his concerns about the remarks made by Deputy Prime Minister Egbert Doran.

"I believe the Honorable Minister Doran owes teaching, non-teaching staff and by extension the nation an explanation or an apology," Johnson stated.

In the spirit of transparency, Minister Doran should explain the outcome of the meeting held with the Minister of Finance Ardwell Irion regarding the solution of the vacation allowance payment which he alluded to during the Council of Ministers Press Briefing on August 10, 2022.

He added, "it seems to be obvious from listening to remarks made in the recent Council of Ministers Press Briefing that he not only misspoke but gave a false hope to educators."

The WITU President expressed that, "in these challenging and financially difficult times you simply do not make such frivolous statements."

However, if Minister Doran has a solution we are eager to hear such. This too is a clear indication of a lack of cohesion in the present Council of Ministers.

Following up on his meeting, Johnson said, "we are not stopping here as I will continue to seek legal counsel moving forward."

"You can rest assured, WITU will continue to champion that every cent owed to public and subsidized teaching and non-teaching staff will be addressed," Johnson concluded.