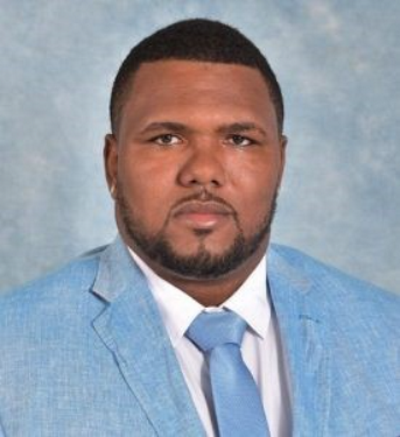 PHILIPSBURG:--- Member of Parliament Akeem Arrindell brings his concerns to the Honorable Minister Doran in charge of VROMI in regards to the latest developments, and ongoing issues overall at NV GEBE.

The company's plans moving forward with the prevention of attacks such as the recent Cyber Attacks, if any upgrades done thus far to prevent reoccurrence, as well as how secure is the network at this present time were some of the questions posed. What exactly was compromised pertaining to client information in the Cyber Attack was also one of the main questions

Arrindell raised concerns and asked if GEBE had done any studies thus far on creating alternate sustainable means of producing Electricity. If so, he wanted Parliament to receive a copy of this study. Personally, he was very curious why surrounding islands throughout the Caribbean successfully invest in Solar and we are still looking at Generators running on fossil fuels. A company with a monopoly charging high consumption costs to clients yet is not interested in seeking ways to lower and run a cleaner, and cheaper operation.

The recent developments and notices to the public via various media where there is mention of the change in GEBE management, then retraction of such a few days later as well as the resignation of Chairman and member of SBOD were also questioned as one can't help but think it's all somehow linked.

Disconnections starting September 2022 have been mentioned and are a serious concern, which personally he is not for these decisions, especially with the many discrepancies within the billing where some received incorrect bills and many no bills received at all. How can we expect to collect or threaten to disconnect households who have not been invoiced for such?

It was also questioned if the rumors circulating that persons are being denied payment plans have any validity. If this rumor is true who decided this and why? It was then questioned if is it better to collect payments even if partial vs not collecting at all.

It was also mentioned that persons who paid their bills early benefited from the old fuel clause rates while those who didn’t must pay a higher rate. Did some use different fuel than others or are we not all living on the same day and time? Also, how can GEBE increase its Fuel Clause as fuel costs raise but not decrease as prices drop? Or will this be retroactively done? The same way it is adjusted at the pump I should be adjusted the same way all around.

With current temperatures on the rise worldwide and there is no alternate competitor for utility services, it leaves GEBE with a monopoly. I believe no one should be disconnected once payment arrangements are made and attempted to be kept up to date.

What is being done to assist our senior citizens, as well as our physically challenged who are unable to make it to GEBE in person, are they still able to receive the same benefits as those who are able to make it to the office to fill the paperwork and qualify for relief from G.E.B.E?

Many are unable to visit the actual office of GEBE as they have a 6-day work week from Monday to Saturday from 8a to 5p when GEBE is open only Mon to Friday 8a to 3ping billed as yet and don’t have the available time with a 6 day work week to visit and wait at GEBE to find out about their bills, and with all the outstanding bills pending what is the current financial stability of the company? Is it so severe that it will eventually affect the daily operations to keep things going?

Does GEBE still pay Aquafin for water that goes unused? How does it benefit GEBE to deny such a basic need to customers as water because of no bills received? Claim it’s because of no money, and then be charged for all the unused water which will only cost GEBE even more.

The Minister also urged to suspend any disconnections until all bills are properly adjusted, created, and actually sent out to clients.

With the numerous unanswered questions and barely any valid information forthcoming, the Minister wanted to be reassured that both Management, as well as SBOD, are held fully accountable for any backlash or future issues due to the way things are being handled.