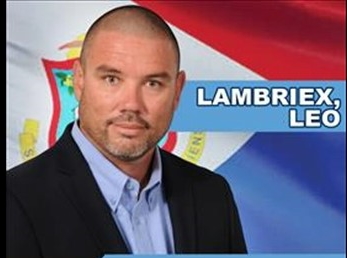 PHILIPSBURG:--- The coalition of 8 has selected the faction staff and policy advisor to Member of Parliament Akeem Arrindell to take up the position as Minister of TEATT that has been vacated by former Minister Roger Lawrence.
Lambriex is the son of Leo Chance former Manager of SEL Maduro and Sons who worked for several years at SEL Maduro and Sons and at Port of St. Maarten prior to taking on the position at the Parliament of St. Maarten. Lambriex also ran as the #18 candidate on the USP slate. Sources say Lambriex already resigned from the USP prior to accepting the candidacy for Minister. It is understood that the screening of the TEATT Minister candidate has already begun, but the new coalition chose to keep the selection close to their chest.
While the coalition of 8 has not come out publicly and said they are the new majority, there are severe issues brewing within the United People's Party. According to well place sources, the party founder has been putting immense pressure on the remaining two UPP members to maintain his wife Grisha Heyliger Marten as the chair of parliament even though his wife has said publicly that she will not support the current coalition of 8 and has also withdrawn her support from the National Alliance and United Peoples Party coalition.
SMN News understands that the party founder Theodore Heyliger who was barred from holding public office since his conviction in the  LARIMAR case dispatched an email to the 3 UPP members namely, his wife Grisha Heyliger Marten, party leader Rolando Brison and Member of Parliament Sidharth Cookie Bijlani, informing them that he is not in support of his wife being removed as the chair of parliament. The sources said that the email was leaked to a media house that eventually made headlines.
SMN News further learned that party leader Rolando Brison refused to be bullied into accepting the wishes of his party founder but prefers to align himself with the wishes of the remaining coalition members who do not want to maintain MP Heyliger Marten as the chair of parliament. They said MP Heyliger Marten has aligned herself with the opposition since she was not able to have the UPP hold a congress in July to remove MP Brison as the party leader and to elect her as the new leader of the UPP.
It should be noted that it has been rumored that MP Brison was bullied out of the chair when persons around him were allegedly paid to record him while expressing his frustration about MP Heyliger Marten. One of the persons that were among the group that illegally recorded MP Brison in his home at a local club is Member of Parliament Chanel Brownbill, who was also a victim of the illegal taping and he is also a member of the coalition of 8.
The sources further explained that since Heyliger could not get Brison to buckle or to further accept the bullying from the founder’s wife, the founder of the UPP then opted to hold Member of Parliament Sidhardt Cookie Bijlani hostage by seeking out his supporters, the Indian Merchants and informed them that they should make sure that their MP of Parliament fall in line into keeping his wife as chair.
St. Maarten should not forget that Brison and Minister of VROMI Doran are not the only ones that were taped. Shortly after St. Maarten became a country and Patrick Illidge broke away from the National Alliance and joined forces with UPP founder he was taped taking bribes from Jaap van der Heuvel, from Bada Bing, the tape, which was also leaked to the media, was the foundation for the Prosecution of Patrick Ilidge whose political career went downhill thereon.
It appears more than likely that MP Rolando Brison is heading down the same road as Illidge when he joined forces with the founder of the UPP.