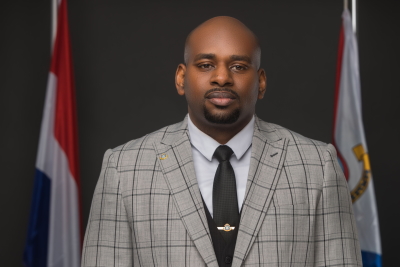 PHILIPSBURG:--- Minister of Public Health, Social Development and Labor (VSA), the honorable Omar Ottley has taken the pragmatic approach to allow the draft legislation Book 7, Title 10 of Civil Code regarding the abuse of short-term contracts, extended maternity, the introduction of paternity leave and various aspects of the law to go into effect as of October 1, 2022, while he works on necessary improvements to the said law.

There are some persons in the community that view the implementation of Book 7, Title 10 of the Civil Code as being abrupt, but the Minister would like to remind persons that this Law was published in October 2021.  The original intention was to publish the National Decree (LB) with the Civil Code going into effect in March 2022.  This was not the case and instead, the LB was published on September 8th, 2022, with a three weeks ’ notice of October 1st, 2022, for implementation.

Minister Ottley met with Parliamentarians in the Parliament Committee of Public Health, Social Development and Labor (CVSA) on September 2nd to discuss his plans to amend the law "even further" after it goes into effect.

He told lawmakers that the amendment (Book 7, Title 10 of Civil Code), which was approved by Parliament in 2019 will not end the longstanding abuse of short-term contracts in its present format but in the interests of the country and continuity, he will push forward with the Civil Code as it has beneficial attributes to both employers and employees.

"I do not believe that the new amendment to the Civil Code will curb the abuse of short-term labor contracts because the option to send employees home for three months and a day still stands," said Minister Ottley.

He did confirm that some features of the law would benefit employees such as an extension of the maternity leave, the introduction of paternity leave, equal treatment, the restriction for employers to singly change labor contracts, and protection in the transfer of enterprises.

"I will go forward with the introduction of this new legislation because it is long overdue. However, I have already informed Parliament that my Ministry is finalizing further amendments to Book 7, Title 10 of the Civil Code, to end the short-term contract abuse permanently. Rather than further delaying the process, I believe it is essential to get the process started because without committing, we cannot solve the problem," said Minister Ottley.

According to Minister Ottley, both the employer's and the employee's interests are being considered while drafting his new proposed law.

Minister Ottley acknowledges that the Book 7 Title 10 Civil Code that was passed in 2019 is not sufficiently forthcoming and the explanatory memorandum lacks some key information. The Minister went on to state that although he was not the initiator of the law, as the Minister present during publication, he can only interpret the law in the best way that promotes a “good employer and employee relationship”.  The law should be interpreted in a fair and just manner that takes into account the employees’ transition from the previous Civil Code without forcing the employer to abruptly take on employees as permanent.

"The previous Civil Code, which expires on October 1st, 2022, states that if an employee received three consecutive contracts without intervals of leave of more than three (3) months, they will become permanent on their next contract. It also allows the employer to keep the employee working for up to thirty-six months with interruptions of no more than three months per interval without making the employee permanent."

The question asked by many is “if an employee is on their third contract that started prior to October 1st, 2022, but ends after, will that employee automatically become permanent, seeing that the amendment is to reduce the number of consecutive contracts from three to two.”

An additional concern is “if an employee’s current consecutive time period already surpassed the newly amended 24 months, but no more than 36 months period prior to October 1, 2022.” In this case, the employee is not automatically considered a permanent employee. However, if an additional contract is granted without intervals of leave of more than three months after October 1st, 2022, this employee is then entitled to becoming a permanent employee.

Example 2: An employee received their first contract from August 1st, 2022, to January 31st, 2023. Their next contract is from February 1st, 2023, to September 30th, 2023. Although the first contract started prior to October 1st, 2022, due to the fact that a new agreement was established after October 1st, 2022, this employee will be viewed as having two consecutive contracts. If the employer gives this employee the next contract without intervals of leaving more than three (3) months, the employee is permanent under this new Civil Code.

Example 5: If an employee was given one contract for a period of 3 years/36 months on July 1st, 2022. The contract will still be regulated by the previous Civil Code as the contract was established prior to October 1st, 2022.  According to the Minister, "the new law reduces the contract period from thirty-six (36) months to twenty-four (24) months and it changes the number of consecutive contracts allowed from three (3) contracts to two (2) contracts. However, it allows the employer to continue using the loophole of sending the employee home for more than three months before rehiring them, making it possible to avoid the employee's position becoming permanent." "The problem remains that employers can send employees home for three months and a day and not be in violation of the law, even with the decrease in the number of contracts before becoming permanent," said Minister Ottley.

His upcoming proposal should solve this issue and be finalized and ready for discussion with local social partners also known as the Labor Tripartite before the end of this year in preparation for the commencement of the legislative process in 2023. The Minister is convinced that this will finally eliminate the abuse of short-term contracts and grant employees the job security many need.

His objective is to regulate under what conditions short-term labor contracts can be used. It is the intention that if an employer wants to hire employees temporarily, this is only possible based on a written fixed-term employment contract. The conditions are that fixed-term contracts can be used if it is necessary to meet a need for temporary workers, which need only exists in part of the calendar year and arises from the increase in activity in the company during that period; if the contract serves to replace one or more temporarily absent employees; or if contracts relate to the execution of a precisely defined work or project.

Project-based work is defined as employment with a definite start and end date.  This allows the employer to hire an employee for a specific period with both parties being aware of an end date, as employees cannot be permanent for a job that is not of a permanent nature.

"Many persons have been in the same job for more than five years but were never made permanent. This is a sad reality that affects their ability to improve their socio-economic standing within our community. These persons cannot purchase a new car or acquire a mortgage to buy or build their own homes, because they do not have what is considered a secure enough income to offer a bank," said Ottley.

Ottley said: “If the social development of the Citizens of Sint Maarten is to be of fundamental importance, we must all recognize the need to end the abuse of short-term contracts. At the same time, we must be mindful of the need to make provisions that do not burden employers with unproductive employees or a labor market that is too rigid which hampers productivity. Ignoring these facts will also have a crippling effect on businesses and the economy of Sint Maarten.”

Some of the new significant priority articles in terms of social, economic, and practical impacts include topics as:

There is an introduction of 16 weeks of maternity leave, which prior was 12 weeks, meaning that the woman involved gets 4 additional weeks of paid leave.

Within the new Civil Code, the employer may not demand a test for pregnancy or a statement to that effect, during the job application as this is in violation the law. Furthermore, the refusal to enter into a labor agreement with a woman because of her pregnancy revealed during the application process is also a violation.

The new legislation introduces the partnership and/or paternity leave for a period of seven (7) days. Employees who are in a family relationship with the child through marriage or recognized the (unborn) child is entitled to continued payment of wages. The general principle is that the father is equally important for the development of a child.

Ensuring equal treatment is in line with international treaties and human rights principles, amongst others established by the ILO, to ensure decent work globally. Further, equal treatment is anchored in article 16 of the Sint Maarten Constitution. Employers are prohibited to discriminate between men and women in employment relationships. Discrimination should not occur in the following situations:

1. Entering into an employment contract (for example if the woman is pregnant);

2. Provision of personal development for the employee (education and training);

6. Termination of the employment contract.

In the event of a transfer of undertaking, the rights and obligations arising from the labor agreements that existed are automatically transferred to the new employer. All terms and conditions between the employee and the former employer apply to the new employer. In this regard, this reference can be made to the Pelican Resort matter.

The possibility for employers to unilateral change labor contracts is further restricted. This is only possible if prior agreed upon by both the employer and employee in writing. In case the contract is unilaterally changed by the employer, the employer must have a substantial reason to change the labor contract that outweighs the interests of the employee and should meet the standards of reasonableness and fairness. Lastly, standardized employment conditions in addition to the labor contract, for example via an employee handbook or employee regulations, are no longer possible.

A copy of the new law scheduled to take effect on October 1, 2022 can be found on www.sintmaartengov.org by the Law section in the year 2021 under the title National Ordinance Labor Contracts/Landsverodening arbeidsovereenkomst (AB 2021, no. 64).