~Council of State Member: “Caribbean Dutch citizens are European citizens and have such rights”~ 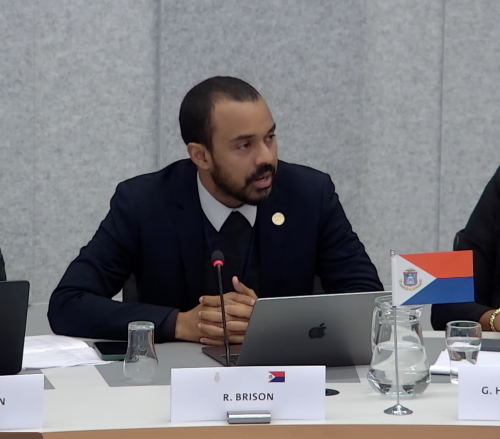 PHILIPSBURG:--- Leader of the United People’s Party MP Rolando Brison brought forward at the Interparliamentary Kingdom Meetings (IPKO) the concern of thousands of St. Maarteners that local banks are not providing many citizens with timely bank accounts and proper services, which is in contravention of European law. The topic was brought forward by the MP during the presentation from the Council of State regarding the application of Treaties and European Union law to the islands of the Kingdom. “In preparing for this debate, my focus was centered on the European Directive 2014/92 which states that all citizens of European Union Citizens have the right of timely access to at least a basic bank account. While it is unfortunate that the banks have for years ignored this directive, something they could choose to voluntarily apply, it was encouraging to hear from the Council of State members that the “Union Right” of Dutch citizens in the Caribbean countries cannot be ignored as per the Treaty of Lisbon,” explained Brison.

“We can see clearly in St. Maarten that the part of the law most ignored by banks is where it states clearly: ‘opening a bank account should not be made too difficult or burdensome for the consumer. Neither is the 10-day time frame for opening a bank account nowhere near a reality,” Brison.

In response to the question, Mr. Comenencia, a member of the Kingdom Council of State, noted that he is familiar with the problem. “The Council of State also received an initiative draft from a Dutch MP to guarantee all citizens within the kingdom the right to a bank account. It seems quite complicated, especially according to the banking sector,” stated Mr. Comenencia. The law referred to is from D66 Second Chamber MP Joost Sneller, which is still in the advisory phase. Brison concurred with the Council of State member and agreed that it is the banking sector in the Caribbean part of the Kingdom that is showing resistance to such legislation being applied. “This is what we experience in St. Maarten as well, and why we have taken the step to create local legislation to address the problem since St. Maarten banks are choosing to not apply the European directive of their own accord,” stated Brison.

Mr. Schrijver, another member of the Council of State, also responded to MP Brison, saying that EU laws are generally also applicable to overseas territories, especially human rights laws. He said that the right to a basic bank account seems to be treated as an exception to this norm. “This is where we are not quite in agreement with the [Dutch] government: We say "realize now that the European Community has evolved into a European Union and that you can't always say "no, this only applies to the European Netherlands," stated Mr. Schrijver.

Brison explained that while observing the refusal of banks to comply with European directives, the MP, who has made legislating his top priority since entering Parliament, did not want to sit still and thus opted to draft a local “Consumer banking protection law” that mirrors the Dutch Kingdom’s “Financial sector oversight” law. The draft law has been handed over to the Minister of Finance as per the motion of January 24, 2022. It has been vetted by the Central Bank and is making its way to Parliament. This is the work of Members of Parliament, which the United People’s Party Faction will continue to make its central focus. When we bring laws, it changes people’s lives for the better. This law will forever improve the way we do banking in St. Maarten.”

Brison also proposed the topic of local banking, international corresponding banking and the unjust blacklisting of Dutch Caribbean countries be its own agenda point at the next IPKO in the Netherlands. Brison proposes that the Dutch Central Bank which oversees the right to basic bank accounts in the Netherlands present to IPKO, as well as D66 MP Joost Sneller whose legislation mirrors that of MP Brison, though from a Kingdom perspective. “This is definitely a Kingdom Relations Issue. If we are equal partners in the Kingdom, there should also be equal rights. One thing the Kingdom must also consider from the Council of State advice that was discussed at IPKO, is that according to their advice, the Member State (the Kingdom of the Netherlands) can be held financially responsible towards the European Union for European directives not being carried out fully within the state, including overseas territories,” concluded Brison.