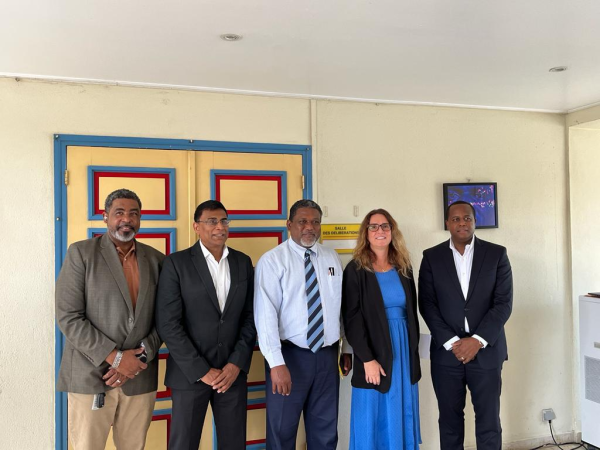 Pond Island:--- TelEm Group CEO, Mr. Kendall Dupersoy, says a new Internet Exchange Point (IXP) recently launched on the French side, is breaking down the telecommunication barriers between French and Dutch St. Maarten and improving services for customers on both sides of the island.

The observation was made during the signing of a Memorandum of Understanding (MOU) at the offices of the Collectivite of St. Martin in Marigot, where the territory’s new IXP, called Smart-IX, was officially launched last week. Signatories included Alain Richardson, 1st Vice President, Saint Martin; Eve Riboud, CEO, Dauphin Telecom; Jean Arnell, CEO, Computech; and Mr. Dupersoy, representing TelEm Group.

“The internet is meant to reduce borders, but the fact is we have had a technical border. Until now, if you wanted to send an email to your friend or family over the border, you literally had to send it internationally first before it is received locally,” said Mr. Dupersoy.

He said with Smart-IX in place, communication with each other can be more efficient and effective because network operators are able to interconnect and exchange traffic locally without having to make use of expensive international routes that also requires bandwidth.

“We can now develop different services on both sides, entrepreneurs can also get involved and do things more efficiently and effectively,” the TelEm Group CEO said.

Mr. Dupersoy says the company is honored to be included in the St. Martin initiative and is especially happy to show what can be achieved working as one island.

TelEm Group has already established its own internet exchange point on the Dutch side of the island which allows more efficient connections with various platforms including Google, Youtube, Facebook etc.

There are hundreds of IXPs in the world, with more than a dozen already in the Caribbean, including Belize, Curacao, Grenada, Haiti, Saint Barthélemy, Suriname and Trinidad and Tobago, and ongoing development work in Guadeloupe and St Kitts.