~ I am sorry the process has taken this long but when it's completed it will be to the officers' benefit. ~ 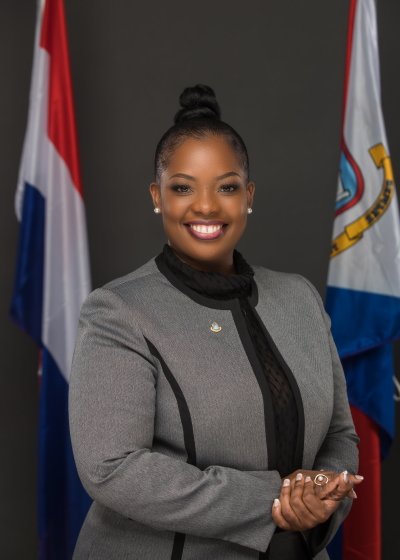 PHILIPSBURG: --- Minister of Justice Anna Richardson announced on Wednesday at the Council of Ministers press briefing that the police law is with the Council of Advice, while the function book has been completed.
Asked if the government of St. Maarten cannot speed up the process by just adjusting the salary scales like it was done in 2010 for top earners and politicians. The Minister of Justice said that the police law is separate from the function book which addresses the positions of police officers. She said the new salary scale structure is at the Council of Advice for review.

Richardson said since the completion of the function book some salary scales have to be adjusted. The Minister explained that the process has to be completed so that the realization of the increases will be at the forefront.
Asked if the government of St. Maarten has the funds available to pay the officers retroactively when the legal process is completed. The Minister said that St. Maarten made known its financial positions on several occasions as such an arrangement have to be made with the officers so that they could be paid in installments. She explained with the recent verdict rendered in favor of the officers the Landsbesluit was issued with the adjusted salary scales, but the retroactive payments have to be prioritized knowing that a 50% was paid in January 2020.

Richardson said that there is a number of officers that have to be paid the remaining 50% and those that received a positive verdict, she explained that there is a lump sum that will be going to the police officers since the funds were budgeted in 2022, currently she said the calculations are being done so that the funds can be disbursed.

After the payments are made the Minister said there will be some money remaining since deductions would have to be made to what is paid out, thus the remaining money will be used to comply with the payments stipulated in the verdicts that were rendered.
Minister Richardson made clear that the government of St. Maarten has to enter into payment agreements with the officers that are entitled to retroactive payment. The Minister is of the opinion that the officers would appreciate the agreements that government will make with them since there would be less deductions and they would be able to take home more money, she explained that while the plan is in place, the discussions still have to take place, while she indicated that it is a priority for the council of ministers, the council of advice, the CCSU.

Minister Richardson said she recognized that the entire situation is frustrating and that the process took a long time since it is more than 11 years since these officers have been waiting for their adjustments. She said that from the onset she made clear that she would use the legislative trail to get the salary scales and functions done the correct and legal way. Minister Richardson said she will not do anything adhoc or to satisfy some individuals and in the meantime when she is no longer in the office all sorts of things can happen. She said while in the capacity of Minister of Justice she will do it the correct and legal way which all officers will appreciate in the long run.