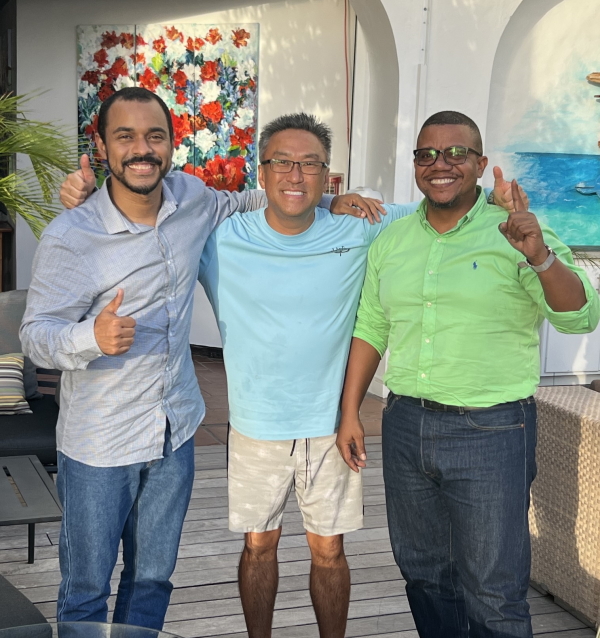 PHILIPSBURG:--- Leader of the United People's UP Party and Member of Parliament MP Rolando Brison and UP President Francisco Lacroes have committed to working with veteran US Dr. Edward Lee MD to help to diminish the exponential breeding of stray dogs and cats on the island.

Dr. Lee has teamed up with several American-trained veterinarians from the USA and several veterinary technicians and volunteers preparing for a one-week visit to St. Maarten. They will work with local non-profit animal rescue organization SXM PAWS and others, to control the rampant breeding of stray dogs and cats through internationally known US-based animal care organization 4 Leaf Rover.

Dr. Lee met with Brison and Lacroes last week to discuss how they could combine efforts to help deal with hundreds of stray dogs and cats roaming the island. Dr. Lee, who attended the American University College in Cupecoy St. Maarten from 1999-2001 before returning to Sarasota, Florida, where he practiced, has been a board-certified anaesthesiologist for 20 years.

MP Brison said Sunday in a press statement, "Before hurricanes Irma and Maria in 2017, St. Maarten already struggled with an overpopulation of stray animals. Many local foundations have the sole purpose of caring for these animals, which is commendable. However, the number of strays has grown significantly, and it hurts my heart and that many animal lovers, to see these animals suffer. We also know the risk of some becoming violent, and we are pleased that Dr. Lee has offered to contribute to humanely reducing the breeding of stray animals."

"The UP Party is committed to solving the many social issues affecting our Country, and this is a low-hanging fruit which we will do everything we can to see through to fruition," said MP Brison.

Dr. Lee will nurse some of these animals back to health and provide spaying/neutering services for free, utilizing donations from foundations and technical assistance from at least one local veterinarian. Veterinarians who participate will be compensated for their time and loss of revenue.
"We will find and gather stray dogs and cats on both the Dutch and French sides and bring them to our "pop-up vet clinic" on the Dutch side where we will be conducting operations," said Dr, Lee.

Lacroes said, "Dr. Lee's journey is an amazing one. He returned to St. Maarten after studying as a Medical Student in 1999 and has graciously offered to give back to the community, which was his home for several years and soon to be his permanent. Being a lover of dogs myself with seven, I am happy to be able to champion this initiative”.

Dr. Lee has visited the island seven times this year alone since February and said he has frequently encountered hungry and skinny stray dogs and puppies. “Based on my interactions and conversations with some of the animal rescue organizations on the island, such as SXM PAWS in Cole Bay, the stray animal problem has become exponentially worse since Hurricane Irma," said Dr. Lee. He is an animal lover who recently lost his 14-year-old 30 kg terrier mix, Abby, last October. He had rescued and adopted 13 years ago.

He said, "To honor the memory of Abby, I decided to embark on a mission to help improve the living conditions of stray animals of St. Maarten and to help diminish the exponential breeding of stray dogs and cats on the island."