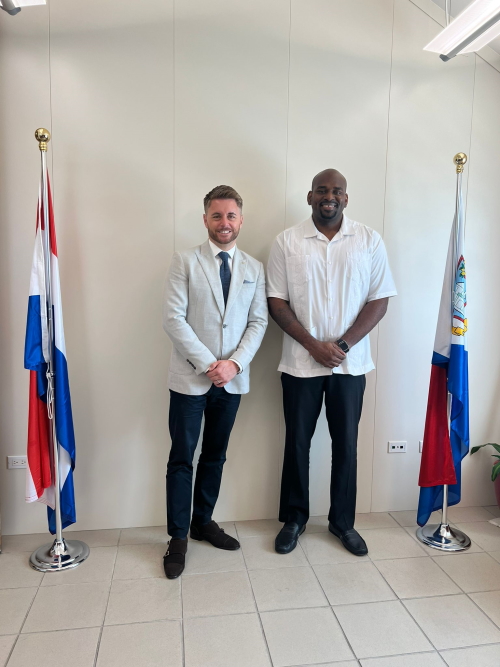 PHILIPSBURG:--- President of P&O Cruises UK Paul Ludlow has confirmed that its latest cruise vessel Arvia, scheduled for inauguration in Southampton on December 9, will make its maiden call at Port St. Maarten on January 17.
In total P&O cruises, the 2023 itinerary will bring an additional 100k cruise passengers to St. Maarten in 2023.

On Tuesday, Ludlow and his team met with Acting Minister of Tourism, Economic Affairs, Transportation & Telecommunications (TEATT) Omar Ottley at the Government Administration building. They discussed the possibility of a future home-porting agreement with P&O Cruises.

Ottley said that factors were laid out for the possibility of St. Maarten increasing its home-porting footprint in the industry and it continues to be a goal for St. Maarten as its spinoff effects are exponential. These factors include St. Maarten’s brand appeal in the UK, local infrastructure, sustainability, and overall cost.

The UK-based Cruise Company will use Port SXM's terminal as its home, allowing passengers to begin/terminate their cruise locally. Ottley said, "This relationship with P&O cruises will positively impact and add to our economy of the island. The tourist office is planning to increase our awareness in Europe, so it is important to continue to grow our relations now. “

He said home-porting brings significant economic benefits for St. Maarten, including creating jobs for locals, as the vessel will require support services such as fuel, water, food, and merchandise, ground transport and small business operators will also profit as passengers disembark and go on tours and shop. So we aim to strategically partner with cruise lines to provide that service.

P&O Cruises has a fleet of six Cruise ships, with the newest vessel, Arvia making vessel number seven. Arvia is the sister to the Cruise ship Iona which carries 5,200 guests.
According to P&O Cruises' promotion, Arvia will offer new and exciting shore experiences. The Cruise line has planned many “top-secret” entertainment partnerships and activities for its passengers’ enjoyment.

The ship will feature a Sushi and Plant Based Restaurant featuring Mizuhana, and Mission Control is a "new unique, immersive experience, an altitude skywalk and miniature golf.
During Tuesday's meeting, Ludlow spoke of "the great first impression" St. Maarten has made on him and his team.

"St. Maarten is the number one Cruise destination in the Caribbean. We have a unique island mix of French and Dutch living harmoniously. We also have hard-working and dedicated Taxi Drivers, Tour Operators, Cruise facility workers, Restaurant operators, and others who contribute to making sure that the visitors to our shores are safe and well cared for," said Ottley.

P&O Cruises’ Arvia is one of the world's largest Cruise ships and will travel to St. Maarten shortly after its inaugural 15-day maiden voyage to the Canary Islands.