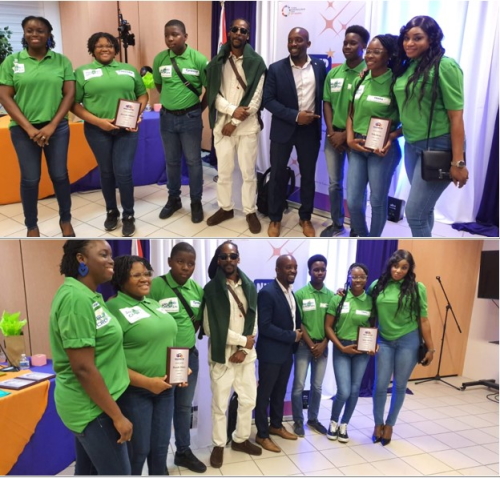 PHILIPSBURG:--- The National Youth Pitch competition that took place on Sunday, November 20th, 2022 was organized by the Ministry of Finance and Islandpreneur.
Seven teams from various schools took part in this intense training and competition but Island Croppin stood out for their idea surrounding agriculture. Our honorable Prime Minister, Ms. Silveria Jacobs commended our school for having a sustainable business solution for the Island. As such, Ms. Jacobs offered to connect the team with the Department of Interior and Kingdom Relations (BAK)and the Department of Agriculture to continue working to provide agricultural solutions for St. Maarten.
The Honorable Minister of Finance, Ardwell Irion stated, although Upcycle from M.P.C. won the grand prize, St. Maarten Academy P.S.V.E came strongly in second place with a difference of only two points between the teams.
The amazing students behind the Island Croppin concept were Tyreese Rodney and Jayson Gomez. Laneisha Webster and Tikeha Bourne later joined the team when their dedication and commitment to the process were realized by organizers. They also received a plaque for their dedication to the process during the training. The team further gained insight and market research support from the Eco St. Maarten Agricultural Research and Development Foundation President, Mr. Denicio Wyatt.
St. Maarten Academy P.S.V.E.'s Acting Principal Ms. Monique Beek commended the students for a job well done. Additionally, Ms. Beek expressed her sincere gratitude to the teachers, Mrs. Kavel Wilson, Ms. Petromella Layne, and Mrs. Marisha Olivacce for doing an outstanding job in preparing our students for this competition. A special thank you to Ms. Michelle Artsen who prepared the exhibition table for the Island Croppin Team for that evening.