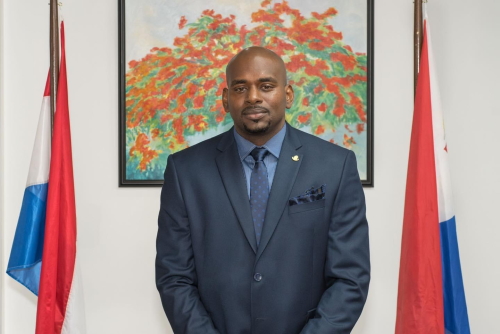 PHILIPSBURG:--- Nearly fifteen thousand tourists graced the shores of St. Maarten on Wednesday in what Acting Minister of TEATT, Honorable Omar Ottley called a "stunning indication that the Caribbean's number one Cruise travel destination was back in business."

"We had a perfect first day of six cruise ships back at the port, which is a good feeling. It is something we have been working diligently for as we rebound from a difficult two years and seven months of very little economic activity," said Ottley on Wednesday evening.

The Minister said St. Maarten could expect six new port calls from Cruise Ships that have never been to the island, added to the regular port calls. He also confirmed that bookings for cruise travel to the island are now up to around 120 per cent. "This is a good indication of what's in store for this tourism season," said Ottley.

The six cruise ships, Star Pride, AidaLuna, Grandeur of the Seas, Voyager of the Seas, and Carnival Magic, were visible from a distance at Port SXM as early as 9 am. Thousands of passengers disembarked in anticipation of seeing the island for the first time or returning for the first time since the global pandemic COVID-19 forced the closure of ports over two years ago.

The streets were filled with visitors on Quads, many in rented cars and off-road vehicles and taxis. Tour Operators were also able to show some of the visitors the island's hidden beauty by both land and sea and bars and restaurants. The shopping districts were filled with happy travelers basking in the joy of their return to the Friendly Island.

Ottley, Acting Minister of Tourism, Economic Affairs, Transportation & Telecommunication (TEATT), spent some Wednesday afternoon interacting with visitors and local vendors. "I wanted to get first-hand information from the vendors and the visitors about the return of the cruise ships in such grand style. I am pleased to say that the feedback was positive from the vendors and the visitors were more than thrilled to be able to visit our beautiful island and people," said Ottley.

Ottley and a team from the Ministry of TEATT visited the vendors in Philipsburg Market Place and spoke to tourists at Walter Plants on Front Street.
He said during the coming six months, the cruise industry's economic impact on the island is expected to rival that of 2019, pre-pandemic.

Minister Ottley congratulated the people of St. Maarten on the restoration of cruise tourism in such a grand style from the floor of Parliament, where he was answering questions raised by Members of Parliament relating to dismissals at Princess Juliana International Airport PJIA.