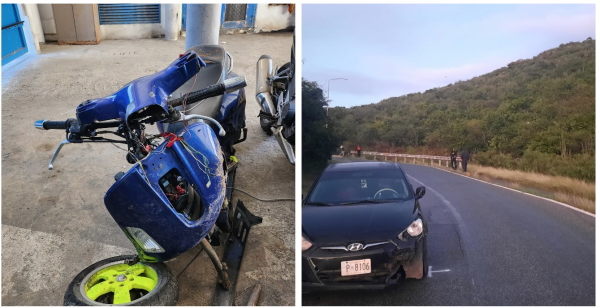 One particularly serious incident occurred on January 18, 2023, around 4:50 p.m. when Central Dispatch received a report of a traffic accident that had taken place on the Oyterpond road in which a scooter rider was injured.

Officers and ambulance personnel were dispatched to the scene. Upon arrival at the scene, the incident involved a traffic accident involving a black Hyundai Accent and a blue Piaggio scooter.

Subsequent investigation revealed that the scooter rider was hopping lost control of his scooter drifted to the left side of the road and struck the black Accent who was coming from the opposite direction. At one point police started looking for the driver of the black Hyundai accent but he was no longer at the scene.

At the same time personnel from the ambulance rendered first aid to the scooter rider and transferred him late to the SMMC.

Sometime later during the day the driver of the Black Hyundai accent presented himself to the traffic department and gave an account of why he ran away from the scene of the accident.

It turned out that after the accident had happened, friends of the rider of the blue scooter who was with him on their motorcycles assaulted the driver, causing him to flee the scene. There was noticeable swelling on the face of the driver with the black accent. After being questioned regarding the accident, the driver was urged to press charges.

Police also have now noticed that scooter riders who now mostly ride in groups have developed the audacity to assault other road users after a traffic accident.

This comes after the police issued several warnings to riders about reckless behavior on the roads. Bikers should now take heed that this kind of misconduct will not be tolerated and these situations will be dealt with.
In addition, request also goes out to other road users who experienced similar kind of situation to report to the police.