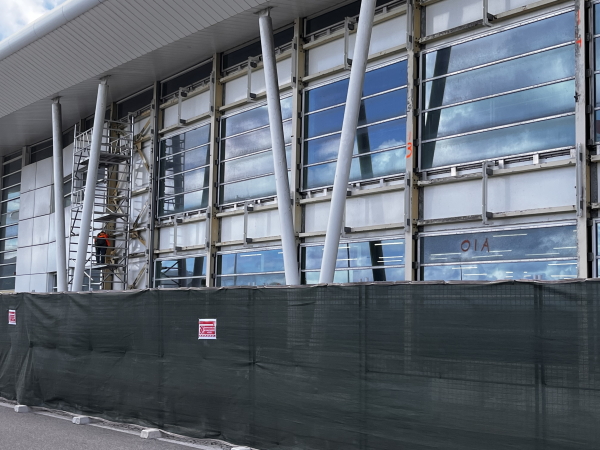 Simpson Bay:---  Passersby can now visibly witness the renewal of the external panels on the façade of the terminal building of the Princess Juliana International Airport. The intricate process includes the replacement of the damaged metal panels, notwithstanding the glass panels which were shattered during hurricane Irma in 2017. The renewals are guided by Contractor, Ballast Nedam International Projects. According to the latest notice provided by the Project Management Unit (PMU), the façade works began in Q4 of 2022, with an estimated completion in Q1 of 2023.
The façade works also included the corrosion treatment of the structural steel wall of the façade. A local subcontractor carried out the removal of the rust, the application of primer, and the paint finish.
Director of the PJIAE Project Management Unit (PMU), Mirto Breell – “The PMU is delighted to announce that the dismantling and installation of the eastern side of the terminal building began this week. So far, the works on the façade facing the aircraft are completed and 50% of roadside works are done. It is significant to note that not all the panels had to be replaced, which lends to significant savings in our budget. There is a lot of coordination required to reduce the impact on the ongoing live airport operation at the terminal building, however, we are determined to get the job completed.”