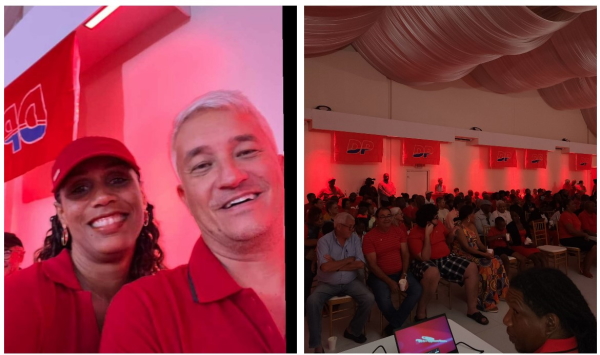 PHILIPSBURG--Independent Member of Parliament Grisha Heyliger-Marten has signed on to be a candidate for the Democratic Party (DP) for the St. Maarten January 2024 parliamentary elections. The party held a re-energizing meeting on Sunday at the event hall in Cay Hill.
She said in her speech, “I am so much at peace right now. The experiences I have endured have impacted me to the core. It has allowed me to take stock of the entire situation and caused me to take a long pause, a pause that made it very clear: The people of St. Maarten deserve better. So, when I heard the calling of the regeneration of the DP, and that the DP wanted to go back to its core values and principles, I thought, well this is exactly what the country needs, what we as a people need, and what I can support.
United People’s (UPP) party founder Theo Heyliger was dressed in red at the event and witnessed his wife signing on to his former party. In the coming weeks the party will be hosting a series of fundraisers and several persons were elected by show of hands as a temporary board of the DP.
The board elected were Roberto Richardson, Toney Arnel, J Wilmans, S. Hilaire, Antonio Rogers, Claudia Lista, V Boyrad, and Johan v. Putten.